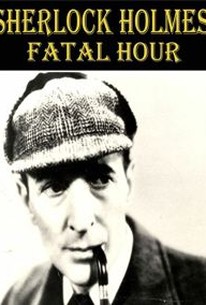 Sherlock Holmes' Fatal Hour marked the first of five appearances by Arthur Wontner in the role of Holmes. Based on two Conan Doyle stories, The Final Problem and The Empty House, the story begins with a robbery and murder at a London bank. Holmes is certain that the mastermind behind this and several related crimes is his old nemesis, Professor Moriarty (Norman McKinnel), at present posing as one Colonel Henslow. Racing against time, Holmes and his aide Dr. Watson (Ian Fleming) try to prevent young diplomat attache Roland Adair (Leslie Perrins) from becoming a reluctant accomplice to Moriarty's latest scheme. Boasting excellent production values (especially notable in the accurate rendition of Holmes' Baker Street lodgings), Sherlock Holmes' Fatal Hour got the Wontner Holmes series off to a rousing start. The film was originally released in the England as The Sleeping Cardinal, a title which makes sense only in context.

The creaky but entertaining film is noted for a great opening scene of the robbery of the Bank of England shot entirely in silhouette and almost entirely without dialogue.

Arthur Wontner as Holmes and Ian Fleming as the reliable Watson are here in the earliest example of a Sherlock Holmes movie that I have seen. And this is Wontner's first appearance as the great detective. Compared to their later portrayals, which seemed to get lazier, I liked this mystery film from earlier in the 30's. Again the time period is moved up, but the style of the early 30's didn't bother me as much as the style of the later 30's in some other films. Visually the use of shadows and striking beams of light in a few tense scenes made for more interest in the mystery. Watching Holmes slowly uncover the clues and work to outsmart his nemesis proved the script was better to begin with for this who-done-it. It still seems a little odd the way Holmes talks about Moriarty like a conspiracy theorist that everyone doubts. That seems more like a movie creation than coming from the exciting words of Arthur Conan Doyle.