Sherlock Holmes in the Spider Woman1944

Sherlock Holmes in the Spider Woman (1944) 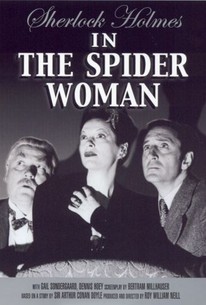 Someone in London has driven several prominent men to madness and suicide. Normally, Scotland Yard would call in Sherlock Holmes (Basil Rathbone) to help solve the case, but Holmes has recently perished in an accident. Or has he? Officially declared dead, Holmes is able to move about undetected as he tries to find out who's behind the rash of suicides -- and why. The culprit turns out to be the bewitching, deadly Andrea Spedding (Gale Sondergaard), and for once, Holmes seems to have met his match. The now-famous climax finds a bound-and-gagged Holmes hidden behind a shooting-gallery target, while his faithful assistant, Dr. Watson (Nigel Bruce), unwittingly prepares to blast away at the target with live ammunition (in wartime, yet). Filled to overflowing with amusing dialogue and devilishly clever plot twists (one of them involving an autistic pygmy!), Sherlock Holmes and the Spider Woman is among the best of the Universal Holmes series. Best bit: told to "act inconspicuous," Inspector Lestrade (Dennis Hoey) ceremoniously rolls his eyes upward and begins whistling loudly -- whereupon Dr. Watson chides him with "Inconspicuous, Lestrade, not half-witted."

Gene Roth
as Taylor
View All

Critic Reviews for Sherlock Holmes in the Spider Woman

The seventh Basil Rathbone/Nigel Bruce film in the Sherlock Holmes series is an inspired one.

Gale Sondergaard brings a healthy dose of camp glamour as the eponymous villain.

This is one of the most clever reimaginings of Doyle's stories to make it into this series of films.

Audience Reviews for Sherlock Holmes in the Spider Woman

There are no featured audience reviews yet. Click the link below to see what others say about Sherlock Holmes in the Spider Woman!