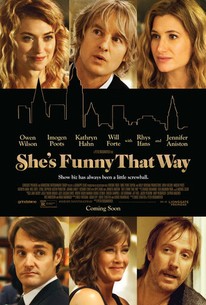 Critics Consensus: She's Funny That Way is an affectionate, talent-filled throwback to screwball comedies of old -- which makes it even more frustrating that the laughs are disappointingly few and far between.

Critics Consensus: She's Funny That Way is an affectionate, talent-filled throwback to screwball comedies of old -- which makes it even more frustrating that the laughs are disappointingly few and far between.

Critic Consensus: She's Funny That Way is an affectionate, talent-filled throwback to screwball comedies of old -- which makes it even more frustrating that the laughs are disappointingly few and far between.

From renowned director Peter Bogdanovich, SHE'S FUNNY THAT WAY is a screwball comedy featuring the interconnected personal lives of the cast and crew of a Broadway production. When established director Arnold Albertson (Owen Wilson) casts his call girl-turned-actress Isabella "Izzy" Patterson (Imogen Poots) in a new play to star alongside his wife Delta (Kathryn Hahn) and her ex-lover Seth Gilbert (Rhys Ifans), a zany love tangle forms with hilarious twists. Jennifer Aniston plays Izzy's therapist Jane, who is consumed with her own failing relationship with Arnold's playwright Joshua Fleet (Will Forte), who is also developing a crush on Izzy. (C) Lionsgate

Quentin Tarantino
as Himself

Will Forte
as Joshua Fleet

On DVD This Week: Inside Out, Doctor Who, Vacation, and More
Peter Bogdanovich’s Five Favorite Films

A light and likeable screwball comedy with a stellar ensemble cast.

She's Funny That Way is trying very hard to be a sexy screwball comedy. It tries so hard, with such a contrived and silly story, that it only succeeds in wearing the audience down. [Full review in Japanese]

She's Funny That Way makes for good fun, though it's not necessarily funny in that, or many other, ways. If nothing else, it's heartening to see Bogdanovich back in the saddle.

The actors do their best with a hit-and-miss screenplay.

This is an easy film to like though not a total success.

With an eclectic career spanning almost five decades, Bogdanovich is one of cinema's most enduring stalwarts.

A surprisingly lightweight comeback vehicle for director Peter Bogdanovich, but one filled with memorable performances...

With 'She's Funny That Way', Bogdanovich fails to make any of his characters identifiable, which can result in us getting bored halfway through the movie. [Full Review in Spanish]

The satirical nature of She's Funny That Way keeps the film entertaining.

She's Funny That Way is one sharper script away from being a truly decent comedy, but the pace and frivolity still make this an enjoyable romp.

J B Queree
One Room With A View

Bogdanovich is clearly in his element, even dashing off some excellent post-modern flourishes.

A sweet but louche playwright gifts young call girls with generous nest eggs to encourage them to stop hooking, but when one such ingénue gets cast in his play starring his wife, the show nearly goes dark. Peter Bogdanovich's philosophical romantic comedy is reminiscent of Woody Allen's show biz fables - full of mistaken identities, magical realism, and a star-making turn from real-life ingénue Imogen Poots. Her lurchy walk is so awkward yet purposeful.

She's Funny That Way is a farcical comedy that delivers some good laughs. The film follows a rising young actress named Izzy Patterson who tells the story of how a chance meeting with a play producer turned into her big break. Starring Owen Wilson, Imogen Poots, Jennifer Aniston, and Rhys Ifans, the casting is pretty good, and they do quite well with this style of board comedy. Still, some of the jokes don't land and there are a few too many characters. Also, the frame story of the actress being interviewed seems rather contrived. Yet despite being somewhat clunky and disjointed, She's Funny That Way is entertaining and kind of fun.

Didn't expect a whole lot, but this wasn't bad. It isn't the greatest movie ever, but it's an entertaining enough hour and a half. It felt very like a Woody Allen movie to me in its delivery and theme. Jennifer Aniston is the bitchiest I've ever seen her. Very amusing. Imogene Poots is also quite engaging as the call girl turned actress. Owen Wilson, sleazy as ever. I am immune to him, I don't see his appeal at all.

SLIGHTLY APHRODITE - My Review of SHE'S FUNNY THAT WAY (2 Stars) Peter Bogdanovich directed my favorite movie of all time, PAPER MOON, as well as the indelible classics, THE LAST PICTURE SHOW and WHAT'S UP DOC? He's made pretty good movies as well (MASK, THEY ALL LAUGHED, THE CAT'S MEOW) and some absolute lousy ones (DAISY MILLER, TEXASVILLE, and ILLEGALLY YOURS) but three great movies in a career that has spanned 6 decades still merits attention. When I learned that Bogdanovich co-wrote the script to SHE'S FUNNY THAT WAY with his then-wife, Louise Stratten, almost 15 years ago, I sensed a long-simmering passion project and couldn't wait to see the results. Clearly positioned as an homage to Preston Sturges' screwball comedies such as HOTEL HAYWIRE and Woody Allen's all-white-all-the-time minor Manhattan-set comedies of manners, SHE'S FUNNY THAT WAY is a loving reminder of films from another time and place, yet it fails utterly with one poor casting choice and a not-quite-funny enough script. Small pleasures are still to be had, but the sense of retread begins right away with Irving Berlin's CHEEK TO CHEEK playing over the opening credits and an old-fashioned title card typical of the silent era. Imogen Poots plays Izzy, a former prostitute turned famous actor, who recounts her journey to a cynical reporter, Ileana Douglas. Told in flashback, Izzy's dreamlike rise to success plays out in true screwball fashion with secrets piled upon secrets, astounding coincidences, and a strong, driving pace. Owen Wilson plays Arnold Albertson, a Broadway director who orders Izzy up to his hotel room via a "Call Girl Service" run by Debi Mazar. I put that in quotes for emphasis, since the anachronism of using the term "Call Girl" is just one of the many dated elements, intentional or not, here. Wilson's first big scene, where he's juggling one phone call with Mazar and another with his wife (a hilarious Kathryn Hahn) is an example of how a delicate soufflé such of this can deflate with the wrong actor. Wilson lacks the zippy timing needed to pull this off, relying on his usual stoned-out, California surfer vibe to navigate a comedy style which would have been better served by someone like George Clooney. Poots, on the other hand, despite putting on a way-too-cartoonish Brooklyn accent, is a charming lead, the ray of light in a sea of insane characters. Her performance, down to the profession, echoes Mira Sorvino's Oscar-winning turn in Woody Allen's MIGHTY APHRODITE, but the verve and snap don't reach those levels. Rhys Ifans as the star of the play Wilson's directing, becomes an important character when he spies Wilson kissing Poots. Long carrying a torch for Wilson's wife, Ifans keeps the dramatic engine churning, and clearly he's having a good time. Also in fine form is Jennifer Aniston, as the world's worst therapist (ok...she's a close second to her former FRIENDS co-star, Lisa Kudrow's brilliant portrayal of Fiona Wallace in the unjustly cancelled WEB THERAPY). Aniston seems to be connected to so many characters here and seemingly has time for none of them, considering her dismissive attitude, aggressive control of any situation, and shattering snap judgements she inflicts on anyone unlucky enough to get in her way. I loved every second of her performance and felt she could have/should have taught Wilson a thing or two. Always loyal to his past colleagues, Bogdanovich lets none of than Tatum O'Neal, Austin Pendleton and Cybill Shepherd pop in with cameos, along with Quentin Tarantino, Tovah Feldshuh and many more. This is old school comedy with such an old school mentality, you wonder if Bogdanovich insisted everyone use land lines on purpose or if he forgot to update his script. The farcical elements are all here and they pile up in clever fashion, but when all is said and done, it feels like an exercise or an homage and not an inspired piece in its own right. It's breezy, sweet yet forgettable, and when you've achieved greatness before, a throwaway good time just isn't enough.