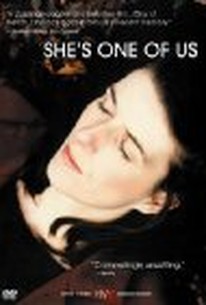 Christine Blanc (Sasha Andres) is a single woman working as a temp. She lies to co-workers, and her parents, telling them she lives with her boyfriend. She's socially awkward, and spends hours wandering the misty outskirts of town or sitting at the mall alone, observing people. She tries to talk to people, but she tries too hard, and they are put off. Uncertain of what to say to people, she uses snatches from conversations she's overheard. She's drawn to her boss at the employment agency, Patricia (Catherine Mouchet), and when Patricia has a fight with her boyfriend, Christine seizes the opportunity and invites her to dinner. Despite a few awkward moments, mostly caused by Christine's desperation to please, the dinner goes reasonably well. A surprising turn of events soon changes the course of Christine's life. Before long, she's gotten her driver's license, co-workers are inviting her out for drinks, she starts dating Eric (Eric Caravaca), and she is offered a permanent position at her job. But life isn't perfect. There are a couple of co-workers who pester her, and the police are soon questioning her about the death of an acquaintance. Degas (Carlo Brandt), an inspector, seems particularly interested in the case. Or is he interested in her? Elle Est des Nôtres marks the feature debut of director Siegrid Alnoy, who co-wrote the script with Jérôme Beaujour (A Single Girl) and François Favrat (Seaside). The film won a FIPRESCI Prize at the 2003 Stockholm Film Festival and a Special Mention at the 2003 Thessaloniki Film Festival. It was also shown at the Walter Reade Theater in New York as part of the Film Society of Lincoln Center's Rendez-Vous With French Cinema in 2004. ~ Josh Ralske, Rovi

Critic Reviews for She's One of Us

While the director's penchant for extended silences and stagy character positioning make it all seem rather studied, the drama nonetheless is compellingly unsettling.

A French psychological thriller that boasts more style and atmosphere than credibility or coherence, Siegrid Alnoy's debut feature ultimately proves a more opaque experience than most audiences will have patience for.

Alnoy produces and maintains a unsettling mood that draws viewers in while keeping them guessing.

Alnoy's unnerving mood piece is spare and atmospheric, even funny.

It's all about look and style, and almost devoid of interest.

This prim white collar serf implodes nearly wordlessly within, a brutal mechanical product of corporate conformity with about as much personality as a xerox machine.

She's One of Us is an eerie French film that deals with formidable emotions that less adventuresome directors have found too hot to handle.

Alnoy's narrative is better suited to a trashy thriller than a vehicle for weighty political themes, but her limpid images, unexpected angles and long, dreamy takes create a beguilingly hypnotic atmosphere of hazy dislocation.

Audience Reviews for She's One of Us

One weird strange French movie. By the way, to point out how baller I am, I am responsible for this film being on the website as I suggested it. You might as well thank me in piss as this movie is simply mediocre. What the hell, right?

She's One of Us Quotes