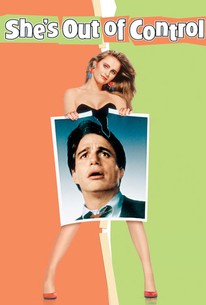 She's Out of Control Photos

Director Stan Dragoti, whose forte is plumbing the depths of the male psyche, plumbs those depths once again in She's Out of Control. Tony Danza stars as Doug Simpson, a broadcasting executive who has trouble adjusting to the fact that his fifteen-year-old daughter Katie (Ami Dolenz) is blossoming into a sexual being. This realization kicks in after his fiancee Janet (Catherine Hicks) takes Katie for a makeover; suddenly she appears before Doug looking like a sultry super model. Now Doug is unable to look at his daughter as anything other than as a sexy chick, and he spends his time fending off packs of horny suitors while dictating morality to Katie. It finally gets to the point where Doug consults with television psychiatrist Dr. Fishbinder (Wallace Shawn), who recommends that Doug read a book he has written for single fathers, advising him, "If you're a slow reader, you better put your daughter on the pill."

Michael Bower
as Kid at Beach

Dustin Diamond
as Kid on the Beach

Brad Tanner
as Boy Friend No. 2

Jim Raposa
as Dancer
View All

Critic Reviews for She's Out of Control

The script is another one of those high-concept specials that sound like they were midwifed by an agent.

Essentially a feature-length sitcom, She's Out of Control specializes not in psychology but in snappy patter.

Despite some funny scenes, the sitcomish treatment of a father's anxiety over his teenage daughter's budding sexuality is mostly shallow and uneven.

Dragoti's dire, dishonest, seldom humorous social comedy has all the nauseating hallmarks of a big-budget sitcom.

It is an extended version of familiar, bland sitcom situations.

She's Out of Control is simultaneously so bizarre and so banal that it's a first: the first movie fabricated entirely from sitcom cliches and plastic lifestyles, without reference to any known plane of reality.

This leads to all manner of trivial, pseudo-comic shenanigans, but not to any insight, comic or otherwise, into the emotional realities of father-daughter relationships.

Leering and tacky, yet annoyingly chaste at the same time. Should have remained the TV-movie it was meant to be.

If we were judging the film on Ms Dolenz's beauty, this would be a winner.

Audience Reviews for She's Out of Control

First of all, this movie starts out too slow, and with awkward editing. But, later it catches up nicely and is enjoyable to watch. Shawn's character's interacting with Danza's is especially entertaining. This was really funny, but also a really heartwarming film. It's pretty good.

Cute 80's film. Rated it half a star higher than it actually deserves because the 80's were my era and I always enjoy a flashback! Tony Danza is a bit over the top as the protective father, but the girls are both good and there's even a small role for Matthew Perry here. Just a nice little movie with a few laughs. May be a bit dated for today's teens, though.

She's Out of Control Quotes