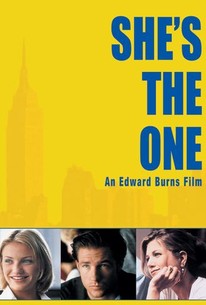 She's the One Photos

This is the second film by actor/director Ed Burns, his first being The Brothers McMullen. The two Fitzpatrick brothers, Mickey (Ed Burns) and Francis (Mike McGlone), would appear to have little in common, as the older is a rather volatile cab driver, the younger is a very settled stockbroker. Just prior to the time of the film, Mickey, after a whirlwind romance, married Hope (Maxine Bahns), one of his passengers. Francis has been married to his lifelong sweetheart (Jennifer Aniston) for some time. However, they are both very competitive about Heather (Cameron Diaz), an old flame of Mickey's. Mickey, who was once her fiance, left her when he found out she was sleeping with someone else. At the time of the story, Heather just happens to become a passenger in Mickey's cab, and they decide to finish exchanging belongings left over from their break-up. When Heather gives Francis (her current lover) the watch Mickey just returned to her, complications multiply. ~ Clarke Fountain, Rovi

Critic Reviews for She's the One

A pleasant package then, easy on the eye, and gently charming but, like The Brothers McMullen, one which places Burns as a comfortable rather than cutting-edge moviemaker.

Burns manages to take on a laundry list of touchy issues in a relatively frank, unflinching manner. His characters retain their dignity and integrity without false dramatic redemption. It's a true adult saga.

A bland, so-so romantic comedy without the charm to see it through.

Like Brothers McMullen-lite and that one was pretty minimal to begin with.

She's the One isn't slick, smooth or particularly good, and it offers only a perfunctory exploration of the human heart.

Edward Burns returns to the themes of family and love that he examined in The Brothers McMullen.

She's The One is carefully observed, well-made, enjoyable, thought-provoking and even funny.

A disappointing second feature from Ed Burns, the director of The Brothers McMullen.

Could be the best film Burns has ever done

Burns' follow-up to 1995's witty The Brothers McMullen continues his wry examination of Irish machismo and its growing irrelevance in the '90s.

Ninety minutes and nobody got hurt...just the way I like it.

Audience Reviews for She's the One

Though the dialogue is usually sharp and funny (when not being blatantly redundant), the biggest problem of this comedy, besides the fact that it takes itself much more seriously than it should, is that all characters except the one played by Jennifer Aniston are so selfish and hateful.

The films of Edward Burns are very earnest, romantic, and they try to encapsulate the lives of New Yorkers in the mid-nineties. There's definitely a lot to love about this film, from its interwoven characters and their love lives, to the harsh realities of love being splattered onscreen, to the slightly detestable and yet likable Heather, played by the very talented Cameron Diaz. Most of the character development was spot on, and yet the dialogue was littered with clichés, which is the most uninspiring thing about this film. If it weren't for the great performances from Diaz, Aniston, and Mahoney I wouldn't be toting those aspects, because without them the dialogue falls flat. Maxine Bahns, who was Burns' real life girlfriend at the time, is particularly stiff and there's no chemistry between her and Burns onscreen. By the end of the film little has been resolved and we're left with characters who aren't as complex as we had previously hoped.

Mr. Fitzpatrick: Let me get this straight. You don't want to cheat on your girlfriend with your wife?  Like with the other Edward Burns movies I have seen, I'm sort of in the middle here. He definitely has some skills as a filmmaker, yet his movies seem to be missing something. She's the One is a decent Romantic Comedy. It's not your typical romcom and I like it for that. Burns kind of reminds me of a not as a great Woody Allen. He writes, directs and stars in all of his stuff, he deals with the same subjects in his movies and there is something about each scene that tells you it is a Burns movie. Now after just a few experiences of watching his movies I feel like I could see a scene from any of his movies and know right away it's his, just like with Woody Allen. She's the One is a watchable and likable "comedy," although I think of it more as a drama. It just seems like a key piece of a great movie is missing here and it just drags the whole movie down. I want to like this so much more then I do. There's a lot to like and yet a lot to scoff at and say "What the hell?"  I'll watch anything Burns does because he has a great skill that he hasn't totally realized yet. When he finds that last piece of the puzzle, it's going to be incredibly special.

I am intrinsically attracted to films like "She's the One." Films that feature a cast of characters acting out in juxtapositional ways always fascinates me. Writer/Director/Actor Edward Burns' film has it's moments of depth and humor and he has quite the ear for great dialogue. He also has a way with pulling terrific performances out of female actors. Jennifer Aniston is quite excellent here, playing both bitingly honest and emotionally grounded with ease. Cameron Diaz shows off her rare cold side as an icy manipulator. The men are decent as well, with Burns on auto-pilot and fine nuanced work from John Mahoney and Mike McGlone. The sole dark spot in the cast is Maxine Bahns. There is something disconnected and confusing about her delivery and her characters actions. Burns wants his story to ring true, and for the most part it does, but in that search for honesty he stays away from any sort of conclusion. Like any good writer he understands that his characters have lived before what we see in the film and they also have lives to live after the credits roll. But where he stumbles, and this is something that really hinders the film's impact, is that with the ending, he does not let the audience in on what the characters feel. Things happen to them and they disappear. Since there is no catharsis for these people there is no catharsis for the audience. This is a major flaw and there are ways around it, but with this being his second feature, it's a bit understandable that he is scared of these risks. In the end, "She's the One" is still very much worth watching for it's biting humor, fantastic dialogue and Aniston's performance- just don't expect anything that satisfying in it's conclusion to match the rest of the film.

She's the One Quotes