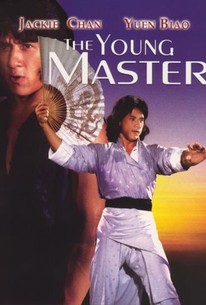 Following up on his success with his 1978 smash hit Drunken Master, Jackie Chan directs this old school kung-fu-comedy. Lung (Chan) is an orphan being raised in a grim martial arts school run by a strict dour master. During the Lion Dance competition, Lung's buddy, Keung (Wei Pai), jumps ship and helps a rival school win. Keung is immediately kicked out of the school and Lung is sent out to go find him. Meanwhile, Keung falls in with a pair of thugs who are looking to bust the master of the rival school out of prison. The cops headed by the earnest Sam Kung (Shih Kien) mistakes Lung for Keung and eventually captures him. Though Lung easily manages to slip out of the cuffs and evade Kung, his daughter proves to be much harder to lose and a formidable kung-fu to boot.

"The Young Master" is one of the films that built the myth of Jackie Chan, and a great introduction to his cinema.

Two thumb up! What a wonderfully choreographed film Jackie Chan ever made. First off the fight scenes are all very good, but the final fight is more amazing. This comedy is mixed nicely with everything elese and sits well even within the final 15 minutes fight scene at the end.

Jackie's directorial debut already showed some of the elements that would become a trademark in future films. The film suffers from some pacing issues, and the plot is nearly invisible, but the action segments are great and easily stand the test of time. Good ol martial arts fun, just don't go expecting a Project A or Police Story.

A hit and miss debut for Jackie Chan, this definitely has it's moments. Unfortunately they are sandwiched between the clumsiest cheeseball schmaltz you're ever going to see (even by HK standards) at the beginning, and an excruciatingly overlong and self indulgent final battle. Worth it for curious fans, but he's done so much better since.