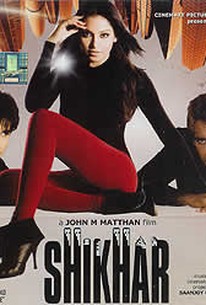 Gaurav Gupta aka GG (Ajay Devgan) is the man who started with nothing and now believes that only money can fuel his ambitions. While Guruji (Jawed Sheikh), to the manor born, believes that wealth means nothing if not used for society. Caught in the tussle between the two is the unworldly Jaidev Vardhan (Shahid Kapoor), who while respecting his father's philosophy, falls hook, line and sinker for GG's gilt-edged dreams. While Guruji hopes that Jai will return to his roots, GG uses the glamorous Natasha (Bipasha Basu) to bewitch Jai and the unscrupulous politician Amrit Patil, to exploit the tribal into selling their lands. Madhavi (Amrita Rao) watches the man she loves being carried away in to a world of wine, women and wealth. If Shikhar is the Pinnacle of good deeds and thoughts, Shikhar is also the height of ambition and greed. Which peak will Jai choose to scale in this battle of man vs. nature?

The synthetic and amateurish way in which the Gandhian ideology is articulated leaves you cringing. Shikhar is a very well-intentioned, good-hearted film but need it have worn its heart on the sleeve?

Not even a third-act rescue from a burning building can prevent the tension from going up in smoke.

There are no featured reviews for Shikhar at this time.