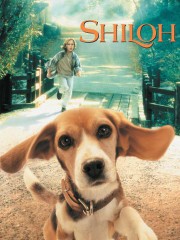 Nick M
½ April 28, 2012
Shiloh is a very fine family movie. There are some slow moving parts of the movie and lots of dialogue that might bog it down sometimes, but it is still an enjoyable movie. It has a great message and is very heartwarming, especially the ending as well as some sad parts. Blake Heron gives an inspiring portayal of Marty Preston, but the one person's performance I am impressed with even after all these years is Scott Wilson as the cold-hearted Judd Travers.

Kyle H
August 7, 2011
I had to watch this movie and Because of Winn Dixie for school. I don't really like movies like this but this was much better then Winn Dixie.

Kristy P
½ August 2, 2011
Really cute movie...cute dog and cute kid. I couldn't get over the kid's dad though!! What kind of man lets his son work for for someone doing manual labor and then when the someone refuses to hand over what he promised, HE JUST LETS HIM DO IT. I was not at all pleased with the Dad's role. Dad should have stood up to the man, and not just stand passively by, letting his kid get used like that.

Super Reviewer
erika b
April 9, 2011
This film is about a boy who finds a dog who is mistreated by its owner. Marty keeps the dog without telling one that he has the boy until he figure out what to do. Mart would do any thing to save this dog. Shiloh has a really good plot and good acting. This film made me cry at the end. If u likes a dog drama or a tearjerker, you should give this film a try.

Tyler M
½ March 26, 2011
When a young boy named Marty Preston (Blake Heron) finds a dog down my the road on a walk, he notices that the dog seems to having a liking for him. Later he finds out that the dog was previously owned by Judd Travers, a ruthless hunter who abused the dog. Now Marty must stand up for what he believed in and fight for the love he has for his new best friend.

My sister was always a huge fan of the film and it wasn't until today that I finally got a chance to see it. Shiloh is a cute and sheer emotional story. Wonderfully directed/written by Dale Rosenbloom. There is also good performances especially on Scott Wilson's for Judd. The amazing transformation of a character who is really brash with the young kid and claims to kill the dog if he runs off again to a man who changes is nothing short of spectacular!

This part of the review contains spoilers so I warn you, if you haven't seen the film don't read this next part.

Only a few films have ever made me cry, The Tigger Movie, Up, Piglet's Big Movie, Mamma Mia (just don't make a big deal out of it) but this film is the biggest tearjerker I've ever seen. Around the end when ol' Judd just won't budge on his deal of giving the boy to Shiloh, even though he worked hard for him while Judd treated him brashly, Judd exhibits the greatest change of heart I've ever seen and decides to give the dog to the boy. And at that moment I turned into a sobbing mess, and any movie that does that to me must be a good one. I'm even tearing up right now thinking about that scene :'(

Shiloh is a pleasure. As emotional as it is inspirational, it shows you what the power of love and the power of standing up for what you believe in does and I love movies that do that.

Ashley H
January 16, 2011
Shiloh is a heartwarming film. Blake Heron shines as Marty Preston. The screenplay is well written and touching. Dale Rosenbloom did a great job directing this movie. I enjoyed this motion picture because of the love of family and also the cute beagle.

Denise M
December 19, 2010
As a beagle owner and dog lover in general, what's not to like about this touching film. Has me crying everytime!

Matthew M
November 9, 2010
A film that has a very good message about a mans word. Though the movie has a sort of laid backness about it there is a sentimental quality to the whole picture that will make it a good family film.

Matthew D
September 1, 2010
"Shiloh on the exterior is another typical heart warming dog film, but the characters act realistically toward conflict and becomes more than just that"