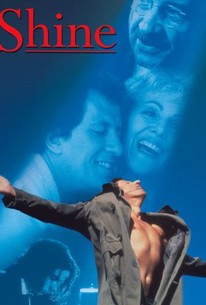 This wrenching true story chronicles the tumultuous life of Australian concert pianist David Helfgott, whose domineering, over-protective father drove him to madness. David is heavily burdened by emotional scars inflicted by his father -- scars that when opened cause devastating tragedy for much of David's adult life.

Brenton Whittle
as Announcer
View All

As befits the subject, with his taste for the romantic repertoire, Shine' is not afraid of stirring up big emotions. It earns them honorably.

Shine beams with warmth, sensitivity, and fine taste, but some of that illumination is the work of our own reflector lamps.

[Helfgott's] extraordinary life is intelligently charted here, and the three actors who play him at different stages are all exceptional.

If, at times, Shine's luster reveals more elbow grease than internal radiance, the movie is still a moving tribute to the human capacity to overcome all odds.

Inspired by the true story of the Australian classical pianist prodigy David Helfgott.

With the exception of a few overwrought scenes, Hicks' Australian biopic of pianist David Helfgott, which caused a bidding war at the 1996 Sundance Fest, is fresh and emotionally stirring without being sentimental or cliched.

I declare "Shine" to be the best film of the year!

Famous bio-pic is indeed well done and engaging as we follow a young piano prodigy from his formative years to modern day, with the emphasis on his manic relationship with his father. In typical Hollywood fashion, while Rush won Best Oscar for his fragile portrayal of a wounded artist, the film is actually carried by Armin Mueller-Stahl whose work as the "tyrannical father" sails way past convention to reveal a complex picture of an artist himself denied. This is the film George Lucas meant for "Phantom Menace".

Bittersweet biography dealing with Australian concert pianist David Helfgott who suffered from mental illness. Most of the film concerns his formative years as a musical prodigy. He escapes the tyrannical rule of his father who disowns him after he departs for London upon being offered a scholarship to the Royal College of Music. Armin Mueller-Stahl makes an indelible impression as his domineering father in a truly unsympathetic portrayal. Helfgott's ongoing obsession with executing Rachmaninoff's technically demanding Piano Concerto No. 3 ultimately reaches an exhilarating manic apex. The narrative is a bit murky when it comes to Helfgott's subsequent psychological breakdown. Are his problems caused by the virtually unplayable composition or the result of physical and mental abuse by his father? It's never quite clear, but regardless, the scene that highlights the performance of this piece is a beautifully edited sequence of talent and dementia. Geoffrey Rush won the Best Actor Oscar for his work in the role of the virtuoso as an adult, but Noah Taylor actually registers much more screen time with his sensitive depiction as the adolescent David.

Eccentric, tempid, heartbreaking. Shine is all of these, yet none. Hidden meanings are encoded in every statement, every gesture, until there's only laughter and joy. Geoffrey Rush, one of the best actors working today, delivers a performance worth watching undoubtedly.