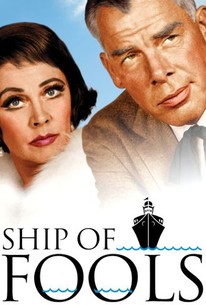 The first person the audience sees in Ship of Fools is dwarf Michael Dunn, who speaks to viewers directly and acts as a Greek chorus throughout the film. It begins on the deck of an ocean liner travelling from Vera Cruz to Bremerhaven. The time is the 1930s, so close and yet so far from war. The cross-section of humanity on board includes ship's doctor Oscar Werner, Spanish political activist Simone Signoret, aging coquette Vivien Leigh, hedonistic baseball player Lee Marvin, philosophical Jew Heinz Ruhmann, a smattering of pro- and anti-Hitlerites (Jose Ferrer plays the nastiest and most vocal "pro") and young lovers George Segal and Elizabeth Ashley. Yes, it's Grand Hotel at sea, a feast for stargazers and an endurance test for those who aren't comfortable with non-stop speechmaking. Despite such lines as "What can the Nazis do? Kill all six million of us?," Ship of Fools manages to stay afloat throughout its 148 minutes. Michael Dunn was nominated for an Academy Award for his interlocutory characterization; the rest of the performances range from brilliant to merely filling up the room. Other Oscars were presented to cinematographer Ernest Lazslo and to the art-direction staff. Ship of Fools was adapted by Abby Mann from the novel by Katharine Ann Porter.

Michael Dunn (I)
as Glocken

Critic Reviews for Ship of Fools

Director-producer Stanley Kramer and scenarist Abby Mann have distilled the essence of Katherine Anne Porter's bulky novel in a film that appeals to the intellect and the emotions.

Don't look now, but as you might expect with message-mad Kramer at the helm of this adaptation of Katherine Anne Porter's novel, there's a heavy allegory aboard.

As glib as Stanley Kramer often is, there is probably nothing glibber in his entire output than this Abby Mann adaptation of Katherine Anne Porter's novel.

The result, in both book and movie, is a Ship without buoyancy and with an alarming tendency to wallow in heavy seas.

This is the worst movie that Mr. Kramer has yet directed, if the verb may be used, loosely, in this context.

Superb acting in an Abby Mann script that seldom descends into bathos.

Prestigious and literary cinema at its most ponderous, transfer of Porter's novel to the the big screen by Kramer (the wrong director) is crude and pretentious, but some of the performances, particularly Signoret, Leigh and Dunn, are good.

The black-and-white overlong, dated and uneven film, a less than endearing talk-fest, is rescued from drowning in a sea of words by its fine cast.

The film's interest lies in the excellent cast.

It makes for OK drama all the same, but it's all on the heavy-handed side. Well, subtlety was never Kramer's strong suit.

Audience Reviews for Ship of Fools

Kind of like the Love Boat but with fools as opposed to lovers. This entourage film is delightfully funny despite the grim circumstances.

A second class luxury liner leaves from Mexico on its way to Germany in the days before WWll. Onboard a cross-section of humanity ... and their afflictions ... there in the twilight zone that voyages can be and seeking resolutions when we know that resolutions are only a bedtime story we tell children, and ourselves. Uneven yet still compelling work.