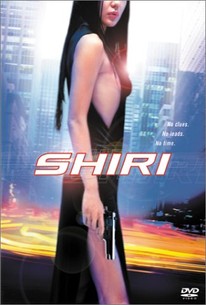 Two of Korea's top secret intelligence agents investigate the murder of a notorious arms smuggler. The agents discover that the murderer is a mysterious sniper who has stolen a top-secret liquid bomb that could lead to the outbreak of an international nuclear crisis.

The acclaim is justified.

It's a post-Cold War action yarn with a nose for Hong Kong-style melodrama, and a loopy cop drama with undeniable entertainment value.

Suffers from all the excesses of the genre.

There's a neat twist, subtly rendered, that could have wrapped things up at 80 minutes, but Kang tacks on three or four more endings.

Starts as an intense political and psychological thriller but is sabotaged by ticking time bombs and other Hollywood-action cliches.

Polished Korean political-action film is just as good -- and bad -- as Hollywood action epics. Is this progress?

Nothing more than a run-of-the-mill action flick.

Little more than an assemblage of cliches drawn from Hollywood and Hong Kong that, in the end, is almost risible.

Proves mainly that South Korean filmmakers can make undemanding action movies with all the alacrity of their Hollywood counterparts.

A great action thriller set in South Korean with Yunjin Kim of Lost. A great script with a few twists and a great ending.

Hollywood action blockbuster, made in Korea. You will feel the strong influence of 90's Hollywood action flicks, just set in a Korean setting with Korean actors. You have your Hollywood staples; Doomsday bomb, rogue unit with questionable motives, countdown timer, troops with questionable aim. So, the question is, how does Shiri compare to the American blockbuster? The answer is, quite well. The film takes a definite shift in tone at The Big Reveal (which I predicted quite early). Both halves of the film are quite entertaining, and the ending is poetic. I wish Park's motives had been a little better established, but I'm probably expecting too much from a Hollywood; sorry, Korean action flick. Nice action, good special effects, and a surprisingly solid story with some nice twists and turns. I like how the action is able to slow down at times to allow us more attachment to the main characters. Recommended viewing for action fans.

Shiri. A fish that can be found in both North and South Korean fresh-water streams. A pretty appropriate title for this film. You'll understand if you watch it. Min-Sik Choi gives a nice monologue about it during the film as well.

What we have here is Korean's take on a cop action film. Now I have seen many Hong Kong films of this type, but what this film has on all of those, excluding Johnnie To films, is a good story.

The first half of this film plays out like a typical police film. It moves quite slowly, as to try and build up the characters, but it becomes a little boring at some points. Luckily, the second half of the film is much better. The action picks up and the story unfolds, leading to a pretty good ending. The fish concept for this film is also a unique touch.

Another place where this film excels is in the acting department. All main characters, Suk-Yu Han, Min-sik, Choi, Yunjin Kim, and Kang-ho Song put on better than decent performances. It is really nice to see Min-sik Choi and Kang-ho Song on opposite sides of the law.

There isn't a ton of action as you may be led to believe, not to mention the poster can be misleading, but there is enough of it. The shootouts are actually pretty good, especially the one that starts in the auditorium, but the shaky camera work takes away from them a bit. I know this is a technique used in these types of situations, but it isn't that successful here.

This film is no Heat by any means, but it is still a more than adequate action-flick. Should you find the time to watch this film, I would say go ahead.

Check the poster for this one. Koreawood has learned a lot from Hollywood. You will never see the shot from this poster in the movie. Not even close. Sadly. If only . . . . What do you think they're selling here? Good looking automatic pistols? Yeah, right. Seriously, though, Kim Yun-jin is a good looking woman.

Hey! Two of my favorites in action, Song Kang-ho and Choi Min-sik, on opposing sides in the race to assassinate the heads of North and South Korea. Will this help to speed up reunification? Remains to be seen.

This movie topped the all-time gross in Korea for Titanic and rocketed the Korean film industry onto the international stage, all for only about a 5 million dollar production cost. Pretty amazing. James Cameron, eat your heart out.

As far as Korean films go, this is not bad as an action thriller, although I have to say that the plot is less than crispy. The opening training scenes of the North Korean soldiers, well, who knows. After everything I've heard about the RoK soldiers during the Vietnam War, I'm willing to believe their counterparts up north are pretty tough as well, and I can't say I needed to see them go through training to demonstrate that they have learned how to kick borat. This movie also doesn't seem to know how to end. C'est la vie.

I like the fish motif here. The shiri/swiri, from what I understand, is an indigenous Korean fish, apparently quite ancient, that swims the clearest waters, perhaps subterranean, which run throughout the country, regardless of artificially imposed borders. It's not the strongest metaphor, but it's decent. I will say that I hope they used animatronic fish for the scenes where the tanks get blown out. I hope.