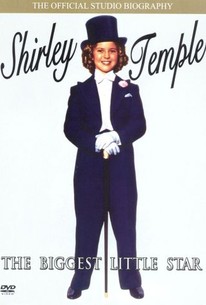 In the realm of Hollywood child actors, few stars have burned as bright as that of loveable Little Princess starlet Shirley Temple. With more than a dozen films at Fox featuring the golden-topped moppet between 1934 and 1938 alone, efforts such as Curly Top and Bright Eyes helped to brighten the spirits of Depression-era audiences as the house lights dimmed and the harsh glare of reality was replaced by the warm glow of the projector bulb. As charmed as audiences were by Temple, however, at the age of twelve her career was all but finished; and though she would continue to appear before the camera the success of her early career remained impossible to recapture. In later life Temple would make a name for herself in the world of politics by becoming the first ever woman to serve as White House Chief of Protocol under Presidents Ford and Carter before being appointed U.S. Ambassador to Czechoslovakia by President Bush in 1988. In this release documenting Temple's remarkable career both in and out of the limelight, clips from classic films combines with newsreels, rare photographs, and seldom-seen behind the scenes footage to paint a vivid portrait of one of the most adorable and talented child actors of all time.

There are no critic reviews yet for Shirley Temple: Biggest Little Star. Keep checking Rotten Tomatoes for updates!

There are no featured reviews for Shirley Temple: Biggest Little Star at this time.