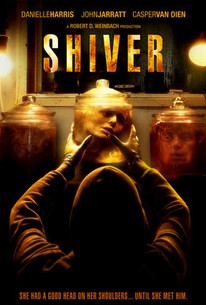 Obsessed with killing Wendy, Rood, the killer, penetrates a police cordon to guard her. During a harrowing car chase, she escapes, earning Rood's twisted sense of love. He later kidnaps her and brings her to his hideout where he subjects her to a horrific ritual of psychological intimidation. She is finally rescued and Rood is captured by Det. Sebastian Delgado. In a daring plan, Rood escapes jail, killing several policemen in the process. Determined to kill Wendy, he storms into her office building. During a ferocious display of carnage, Rood is finally killed by Wendy who shoots down the monster of her living nightmare, transforming from a timid mouse to a lioness of great courage and determination.

While it doesn't reinvent the wheel by any mean, it still works with its content and subject quite well to give a decently entertaining final product.

If you're physically shivering during this movie, it's probably just because you've got your air conditioning turned up a little high, because tension and scares are things Shiver seriously lacks.

Matt Donato
We Got This Covered
View All Critic Reviews (2)

There are no featured audience reviews yet. Click the link below to see what others say about Shiver!