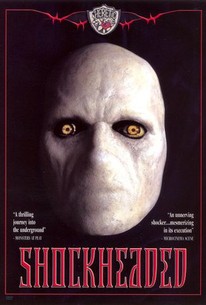 A lonely man living in a rundown hotel room sets out on a disturbing journey upon learning that a local woman has gone missing in director Eric Thornett's haunting horror mystery. Noble leads a life of isolated solitude, but when a strange series of notes appear from under the door of his decrepit room bearing some rather odd instructions, he begins to wonder if he might not be so alone after all. Haunted by visions of a horrific white mask in the small hours of sleep and questioned by a pair of detectives as to the whereabouts of a missing girl, Noble soon begins to wonder if his grasp on reality may be slipping. When an elusive stranger arrives at Noble's door imploring him to seek out the answers to all of his questions by embarking on a strange mission, the chance to find out just what's controlling his strange altered reality proves much too powerful to resist.

There are no critic reviews yet for Shockheaded. Keep checking Rotten Tomatoes for updates!

There are no featured reviews for Shockheaded at this time.