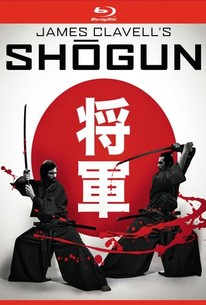 Based on the epic novel by James Clavell, Shogun originated as an epic five-part television miniseries, filmed on location in Japan. Richard Chamberlain stars as John Blackthorne, a 17th century British sea pilot in charge of a Dutch vessel. Shipwrecked off the coast of Japan, Blackthorne is in danger of being executed by the suspicious, reclusive Japanese hierarchy, but before long he has been accepted into the local culture. Accordingly, he begins to think of himself as Japanese, adopting the nation's customs and, while wearing the robes of a Samurai warrior, helping to defend the land against its enemies. The arrival of Blackthorne unfortunately arouses the interest of European empire-builders, who hope to add Japan to their holdings. Toshiro Mifune costars as Toranaga, a warlord who befriends Blackthorne, and Yoko Shimada appears as Mariko, the interpreter who eventually falls in love with the Englishman. When it first aired in September of 1980, Shogun caused eyebrows to raise with its seemingly reckless disregard of certain TV taboos: for example, one man is beheaded in full view of the audience, while another relieves himself on the body of an enemy. Most of the early dialogue sequence are in Japanese, which resulted in complaints from many monolingual viewers. As a result, the 1983 rebroadcast of Shogun included English narration by Orson Welles. The 125-minute feature version of Shogun, prepared for home video, includes English subtitles--as well as several originally excised scenes of nudity and excessive violence. ~ Hal Erickson, Rovi

While its depiction of Japanese history is oftentimes dodgy, it nonetheless remains an affecting portrait of Japanese life for American audiences at a time when such a thing just wasn't that common.

Everything is predictable, nothing is interesting. [Full Review in Spanish]

This excellent nine-hour program (13 hours when first shown on TV) holds up as one of the best of the miniseries, a prolific genre at the time.

This the kind of mini-series that the networks don't even ATTEMPT anymore!

One of the finest miniseries ever produced. An exciting and literate adaptation of James Clavell's masive novel that rivets you from beginning to end.

One of the great mini-series from the 1980's. Avoid the choppy theatrical cut.