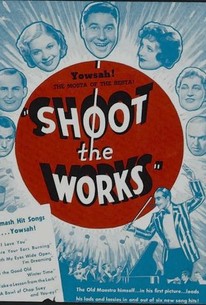 The Ben Hecht-Gene Fowler Broadway flop The Great Magoo formed the basis of the 1934 Paramount comedy Shoot the Works. Jack Oakie stars as seedy sideshow barker Nicky, who uses everyone he meets to get ahead. Nicky isn't even above exploiting his singing sweetheart Lily (Dorothy Dell) to suit his purposes, but this time it is he who ends up the loser -- at least until he gets wise to himself. Bandleader-comedian Ben Bernie and perennial second lead Arline Judge contribute a few laughs, but the hit of the show is gorgeous Dorothy Dell, who tragically died in a car crash just before this film was released. Shoot the Works was remade by Bob Hope as Some Like It Hot (1939).

Alison Skipworth
as The Countess

Monte Vandergrift
as Man from Board of Health

Ann Sheridan
as Secretary
View All

Critic Reviews for Shoot the Works

There are no critic reviews yet for Shoot the Works. Keep checking Rotten Tomatoes for updates!

There are no featured reviews for Shoot the Works at this time.