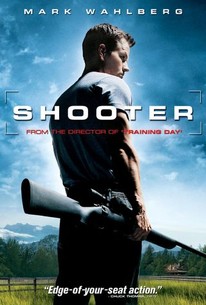 Critics Consensus: With an implausible story and numerous plot holes, Shooter fails to distinguish itself from other mindless action-thrillers.

Critics Consensus: With an implausible story and numerous plot holes, Shooter fails to distinguish itself from other mindless action-thrillers.

Critic Consensus: With an implausible story and numerous plot holes, Shooter fails to distinguish itself from other mindless action-thrillers.

A top Marine sniper who previously abandoned the military after a routine mission gave way to tragedy is double-crossed by the government after reluctantly being pressured back into service in Training Day director Antoine Fuqua's adaptation of Stephen Hunter's novel Point of Impact. There was a time when Bob Lee Swagger (Mark Wahlberg) was the best trigger-man in the military, but after growing disillusioned with the system, he disappeared without a trace. When high-profile government officials locate him at his remote mountain retreat following an extensive search, Swagger is coerced back into service in order to stop a determined assassin from taking out the President of the United States. In the process of carrying out his mission, however, Swagger suddenly realizes that he has been betrayed when he becomes the subject of a nationwide manhunt. Now wounded and desperate to reveal the culprits behind the conspiracy before it's too late, Swagger sets into motion a revenge plan that will send shock waves rippling to some of the most powerful and corrupt leaders in the free world. Danny Glover, Rhona Mitra, and Ned Beatty co-star in this conspiracy-driven action thriller that asks what it truly means to serve one's country. ~ Jason Buchanan, Rovi

A.C. Peterson
as Off. Stanley Timmons

Chic Gibson
as Mayor of Philadelphia

Wahlberg isn't as confident or credible as a tough guy with a mantle of regret.

The cinematic equivalent of one of those chunky special-forces-porn airport novels.

Ultimately, it's just a vigilante picture with ideas above its station.

The film's weird, thin politics become harder to swallow as it lurches from set-up to set-up.

It's no masterpiece, but it's way better than the usual big gun/small brain fare.

The one-guy-against-many-trained-killers is almost comic-book level, but that's the nature of author Stephen Hunter's Bob the Nailer, ex-Recon Marine sniper. "Shooter" is about government corruption vs. Marine corps integrity. It's not deep, but it's fun.

That Shooter is far better than can be expected is down to the excellent direction of Antoine Fuqua. He marries action movie clichés with a subversive sense of paranoia and humour.

Shooter is nothing special, but a combination of appealing performances, intriguing plot twists and exciting action sequences mean that we're never less than entertained.

There's enough unsettling paranoia that you don't exactly know how it's all going to turn out. It feels more like it could have come from the early '70s, when happy endings might not necessarily be right around the corner.

I enjoyed Shooter. It is always nice when it is one-against-the-world, and the one comes through - even though it would be a fantasy.

Mark Wahlberg is quickly becoming my favorite action star with the release of Lone Survivor coming after this action thriller from 2007. He's become the new military hero; this film following in the vein of Rambo. The plot is actually carved straight out of a Rambo movie: Gratuitous violence is blended with a conspiracy story. Wahlberg's character, Bob Le Swagger is tricked by government officials into a mission that isn't what was advertised. The ensuing manhunt, displaying Swagger's skill, cunning, and real patriotism contrasts excellently with the conniving government men. Glover's and Beatty's characters are really sleazy and morally bankrupt. This aspect of the film is reminiscent of Harrison Ford's A Clear and Present Danger even more than Rambo. Critics have degraded this film as implausible and the cinematic equivalent of "special forces-style" pulp fiction, but I see it as undeniably entertaining. What were you expecting, Ingmar Bergman's The Seventh Seal? Anyway, considering today's Osama Bin Laden-Benghazi type headlines, is it all that implausible? It's all about moral choices in the face of a completely corrupt system. Finally, I love that Wahlberg's character calls my home state Tennessee: "the patron state of shooting stuff", even though that grammar is atrocious.

I like Mark Wahlberg. I'm a huge gun fanatic. I love action movies. But this movie disappointed man... The plot, typical. The ending, one of the worst conclusions you can ever end a movie on. The action, not exciting at all. Is there tension? Not really. This movie fails on a lot of parts. Only thing I've gotta say about this movie is how some scenes (especially the snow sniper scene) is gorgeous. I wanted to like this movie, but it was just another mindless Hollywood action flick.