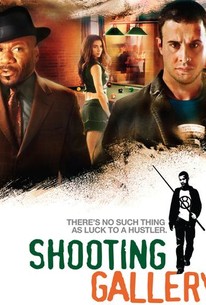 A billiard-savvy street kid resorts to desperate measures after finding himself caught between a pair of veteran hustlers and a corrupt vice cop in this urban thriller directed by Keoni Waxman and starring Freddie Prinze Jr. Jericho Hudson (Prinze Jr.) knows his way around a pool table, but he's still no match for legendary pool sharks Cue Ball Carl Bridges (Ving Rhames) and Tenderloin Tony (Angus Macfayden). With some help from his grifting girlfriend Jezebel (Roselyn Sanchez), Hudson sets a plan into motion that will draw Cue Ball Carl and crooked cop Timothy Mortensen into a dangerous confrontation, but if the plan doesn't go just as planned Hudson might not live long enough to call his next shot.

Devon Sawa
as Paul the Pawn

Leicester Landon
as Janna
View All

There are no critic reviews yet for Shooting Gallery. Keep checking Rotten Tomatoes for updates!

Freddie Prinze Jr. is still a pretty bad actor, but action was really good, and the storyline kept me interested.

Very good film. Worth a watch.