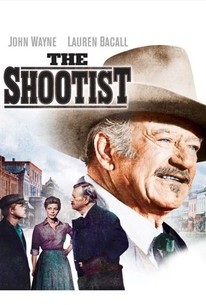 Critics Consensus: Simple in story while sophisticated in texture, The Shootist is a fittingly elegiac swan song for one of Hollywood's most iconic stars.

Critic Consensus: Simple in story while sophisticated in texture, The Shootist is a fittingly elegiac swan song for one of Hollywood's most iconic stars.

About ten minutes into The Shootist, Doctor Hostetler (James Stewart) tells aging Western gunfighter John Bernard Books (John Wayne), "You have a cancer." Knowing that his death will be painful and lingering, Books is determined to be shot in the line of "duty." In his remaining two months, Books settles scores with old enemies, including gambler Pulford (Hugh O'Brian) and Marshall Thibido (Harry Morgan) and reaches out to new friends, including a feisty widow (Lauren Bacall) and her hero-worshipping son (Ron Howard). Throughout the film, Books' imminent demise is compared with the decline of the West, as represented by the automobiles and streetcars that have begun to blight the main street of Books' hometown. ~ Hal Erickson, Rovi

Ricky Nelson
as Books' fellow lawman in flashback
View All

Critic Reviews for The Shootist

A subtle, touching valedictory tribute to both Wayne and the Western in general.

Unless you have already discovered that John Wayne is an actor as well as a movie star, you will be surprised by the dimensions he provides for J.B. Books.

Ambiguity takes the bone out of the movie and it collapses.

An elegiac Western for Wayne.

There's nothing in The Shootist you haven't seen done many times before and done better.

[John Wayne] gives one of his most controlled and intelligent performances.

This was John Wayne's last movie and it turned out to be a fitting tribute to a great talent.

John Wayne's very last film, an elegy for a dying cowboy, expresses the essence of his screen image, while borrowing elements from his own life.

That rare film where a star and an audience get to say goodbye to each other.

Audience Reviews for The Shootist

The Shootist is a terrific Western starring the legendary John Wayne. The film was to be The Duke's final film role. The plot is about a hired that is dying of a terminal illness and looks in going out in fashion. Wayne is wonderful in his performance and this is a well executed Western and a classic that is a must see for genre fans. The film boasts a good cast alongside John Wayne, and each actor gives the film something unique. This film brings an end to an era of great Westerns. This is brilliantly directed and acted. Despite its imperfections, The Shootist is a fun and entertaining picture and like I said, John Wayne is great here, and he gives his all in a stellar performance that simply is a mesmerizing final Swan Song to his great career. Don Siegel direction is wonderful and he was able to capture something special with this film. The film at times could have been better; luckily Wayne's performance holds the hold thing together. Although not on par with the far superior Spaghetti Westerns, The Shootist is still worth watching for genre fans. The film bring a comedic tone at times that you can enjoy, but also there is a dramatic overtone as John Wayne on-screen says goodbye to the genre, he made famous. This is a fine, final picture that is a must see for John Wayne fans or any genre fans looking for a standout picture that is among the best swan songs for an actor. The film lives on as a testament to John Wayne's talents and every ounce of the acting ability that Wayne possesses is displayed beautifully in a wonderful near flawless Western.

The idea of John Wayne's last movie being about a dying gunfighter is not only incredibly fitting but even when faced with the obvious ending that's been coming for over 90 minutes by the time it goes down, incredibly sad. Wayne does his later-era, typical cranky old codger with entertaining diction well, Lauren Bacall fits the bill but shockingly enough, Ron Howard does a better job in front of the camera in The Shootist than he ever did behind the camera. The movie for the most part is what you expect, but that powerful shootout at the end compounded with Howard's performance made The Shootist for me. And despite the fact I really never dug on Wayne, I did get choked up a bit at the end despite the blatant ending.