The Shop Around the Corner1940 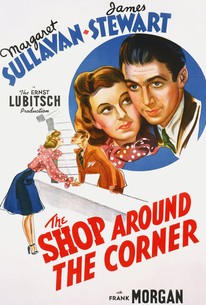 Critics Consensus: Deftly directed by Ernst Lubitsch from a smart, funny script by Samson Raphaelson, The Shop Around the Corner is a romantic comedy in the finest sense of the term.

Critics Consensus: Deftly directed by Ernst Lubitsch from a smart, funny script by Samson Raphaelson, The Shop Around the Corner is a romantic comedy in the finest sense of the term.

Critic Consensus: Deftly directed by Ernst Lubitsch from a smart, funny script by Samson Raphaelson, The Shop Around the Corner is a romantic comedy in the finest sense of the term.

The Shop Around the Corner Photos

The Shop Around the Corner is adapted from the Hungarian play by Nikolaus (Miklos) Laszlo. Budapest gift-shop clerk Alfred Kralik (James Stewart) and newly hired shopgirl Klara Novak (Margaret Sullavan) hate each other almost at first sight. Kralik would prefer the company of the woman with whom he is corresponding by mail but has never met. Novak likewise carries a torch for her male pen pal, whom she also has never laid eyes on. It doesn't take a PhD degree to figure out that Kralik and Novak have been writing letters to each other. The film's many subplots are carried by Frank Morgan as the kindhearted shopkeeper and by Joseph Schildkraut as a backstabbing employee whose comeuppance is sure to result in spontaneous applause from the audience. Directed with comic delicacy by Ernst Lubitsch, this was later remade in 1949 as In the Good Old Summertime, and in 1998 as You've Got Mail. It was also musicalized as the 1963 Broadway production She Loves Me. ~ Hal Erickson, Rovi

Edwin Maxwell
as Doctor
View All

News & Interviews for The Shop Around the Corner

View All The Shop Around the Corner News

Critic Reviews for The Shop Around the Corner

Most remarkable for its fearlessness.

The charm of the gimmick in Lubitsch's take is passed over quickly in favor of studying both its effects on those involved, as well as the dynamics of the workplace at large.

Nostalgic and charming romance with special moments in the extra-narrative action.

Lubitsch demonstrates that romantic comedies, like popcorn, can be enjoyed salty as well as sweet.

As the plot has as many complications as characters, much of the fun comes in watching Scripter Samson Raphaelson neatly tangle and untangle them without tying himself in a hard knot.

Although picture carries the indelible stamp of Ernst Lubitsch at his best in generating humor and human interest from what might appear to be unimportant situations, it carries further to impress via the outstanding characterizations by Margaret Sullavan

A delicious and delightful romantic comedy which is full of warmth and high spirits.

While The Shop Around The Corner feels European in nature, the film shows a growth in the work of Ernst Lubitsch as a filmmaker.

It's difficult to refer to any film, even the very greatest, as a "perfect film," but few fit the bill so beautifully as Ernst Lubitsch's sparkling romantic comedy, The Shop Around the Corner.

Beneath the comedy... there's an undertow of sadness. The main characters are haunted by the fear of loneliness and the fear of ending up unemployed - which makes the film an appropriately bittersweet confection for our own straitened times.

Audience Reviews for The Shop Around the Corner

This romantic comedy, from legendary Ernst Lubitsch, was the original inspiration for the nauseatingly trite "You've Got Mail," but is centered on Budapest life rather than urban New York City. Lubitsch set the story in Budapest, his home town, and featured the likes of Jimmy Stewart and Margaret Sullavan as beguiled co-workers, who aren't aware that they are each the other's anonymous pen pals. Throughout their strange courtship we find out about an affair between a co-worker and the shop's owner's wife, watch a Christmastime rush at the shop and a game that eventually unravels the truth. Besides the great performances from our two leads, all the supporting characters are kooky or sweet, and the antics within the store are just as interesting and entertaining to watch as the chemistry between Stewart and Sullavan. The small town charm of Budapest is also a central character, making this film an all-time romantic comedy classic.

A Hungarian clerk falls in love with a pen pal who turns out to be his co-worker, with whom he has an antagonistic relationship. A remarkably dark romantic comedy, The Shop Around the Corner falls well short of charming (any claim it has to that adjective comes in the person of the naturally delightful Jimmy Stewart). Instead subplots of infidelity and a failing business cloud whatever romantic juice can be squeezed out of the primary plotline. The film is not boring nor are the characters bland, but the heavy air of the Hungarian milieu and the heavier subplots bring the story to a slow climb toward nothing interesting. Overall, I suspect the modern You've Got Mail might have a better tone but less substance, and as a whole, this story feels too uneven.

Lubitsch lends his featherlight comic zest to that most claustrophobic of spaces: the workplace. In this case its a small leather goods retail store where the staff see each other monotonous day in and monotonous day out. The focus is on a young man who happens to be the senior clerk (nowadays that'd be "associate") who pines for a woman he's only written to, meeting her from an ad in the paper (nowadays that'd be Facebook or some such). The comedy happens that his love might be far different in person than on paper. Nobody's perfect in this souffle, which only adds to the taste as it rises.

This one is a classic romance. But one of those really-good-can't-get-enough-of-them classics.

The Shop Around the Corner Quotes