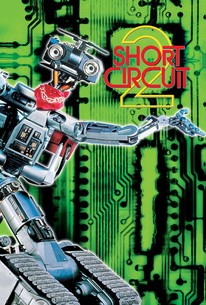 In the sequel to Short Circuit, the lovable robot returns to help out his creator, Ben Jahrvi (Fisher Stevens), and his partner, Fred Reitter (Michael McKean), in their new toy-robot business. However, the warehouse where they have set up their operation turns out to be a criminal hangout, and good old robot No. 5 gets mixed up in all kinds of trouble.

An awkward manifestation of both the typically overwritten trappings of a box-office mandated sequel and a seriously thoughtful rumination on free will.

This sequel is slightly better than its barely-above-average predecessor.

Sequel to Shirt Circuit is a good attempt at following up the original film, but honestly, I felt that it could have been better as well. The original film was terrific at had charm throughout with a good cast of good actors. Here, we get a bit of the same, but it feels watered down slightly, forced in order to make it appealing, almost as if they tried to outdo what the original did. I'm not saying that this sequel is bad, far from it, as it does have its moments, but it does leave a bit to be desired in the long run. I guess this one suffers the same fate as all sequels do. They try to replicate the original, yet fail because the first outing was very good and its follow up lacked the flair that made the original so entertaining. Here we have a mildly good film, but throughout the film we always get a sense that it tries to outdo the first, but it loses its steam halfway and it just becomes an average movie. Short Circuit 2 is good, but it's not great either. I've seen better sequels than this, and this one just doesn't possess anything truly engaging. If you're looking for a truly entertaining sequel, you won't find it here, I mean it does have its moments, but it also could have been much better as well. Short Circuit 2 in the end feels rushed in its conception, and the result ends up being a so-so film that is good, but you are simple left wanting more out of this film.

A guilty pleasure. That personally, I think better them the first picture.

I can barely remember the first one in all honesty. This one I watched thanks to free movie website Crackle. (I can just see this website is going to be bad news for me. I really can't resist an 80's movie - particularly one I missed out on first time around. Even if I did miss out on it for a reason as with this one!). This is actually kind of cute. If it was made today, I would write it off as kidsy crap (and that is still a fair comment), but as it does have the 80's nostalgia thing going for it... pretty watchable. The bits with Johnny 5 are a little tedious, the Indian guy is so stereotyped it is almost offensive, (but hey, 80's movie. PC didn't exist back then!), and the bad guys are a bit annoying, but it is funny in it's way and Cynthia Gibb shines as Sandy. Buy it? No way, but watch for free - no complaints here!