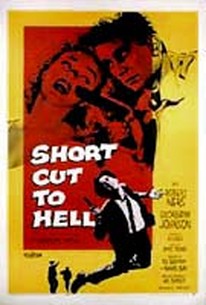 As a favor to an old friend, producer Alex Gordon, James Cagney turned director for the first and only time in his career with Short Cut to Hell. The film is a remake of the 1942 Veronica Lake-Alan Ladd starrer This Gun For Hire. Robert Ivers plays Kyle, a hired killer who is double-crossed by his employer Bahrwell (Jacques Aubuchon). Seeking revenge, Kyle is reluctantly teamed with Glory Hamilton (Georgann Johnson), who has been targeted for elimination by Bahrwell and his henchman Nichols (Murvyn Vye). Unfortunately, Glory is the girlfriend of detective Stan (William Bishop), forcing Kyle to go on the lam before he can settle accounts with the film's principal villain. Kyle is finally able to get even with Bahrwell, and in the process reveals his long-dormant "good" side. Though the film itself is nothing special, Cagney's direction is sharp and efficient; it's too bad that Short Cut to Hell was his only effort behind the cameras.

John Halloran
as Guard
View All

The only film directed by James Cagney.

Unnecessary remake of This Gun for Hire is just another standard crime drama. The leads are adequate but certainly don't have the star charisma of Alan Ladd and Veronica Lake.