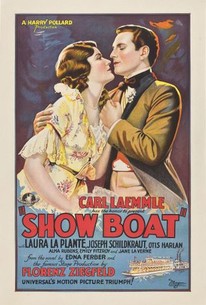 Show Boat was a part-silent, part-talkie adaptation of the book by Edna Ferber. The film traces the life of Magnolia Hawkes (Laura La Plante), daughter of Captain Andy of the Cotton Blossom, a 19th century show boat. Magnolia's head is turned by handsome gambler Gaylord Ravenal (Joseph Schildkraut), who woos and weds her. He turns out to be a poor husband and provider, eventually deserting Magnolia and her daughter. But Magnolia, harking upon her performing experiences while on her father's show boat, becomes a successful stage star and raises her daughter all by herself. Though filmed just two years after the Broadway debut of the Jerome Kern/Oscar Hammerstein Jr. musical Show Boat, this film is more closely based on the source novel than the stage play. While the immortal "Ol' Man River" was retained, the rest of the Broadway version's songs were jettisoned in favor of several forgettable tunes written by entrepreneur Billy Rose, who convinced the movie's producers that the public had grown tired of hearing the Kern-Hammerstein score! Show Boat would be remade twice, with most of the original songs intact and without Rose's "improvements," in 1936 and 1951.

Ralph Yearsley
as The Killer

Helen Morgan
as Julie (in the prologue)

Jules Bledsoe
as Joe (in the Proluge)

There are no critic reviews yet for Show Boat. Keep checking Rotten Tomatoes for updates!

Great film despite the fact the film was not well-kept. There are some silent parts, that were presumably supposed to be part of the talk part. Despite the in/out sound of the version that I watched, it's a highly entertaining version of Show Boat.