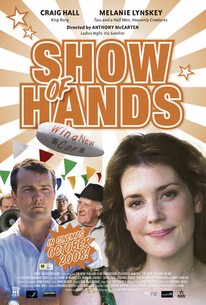 A handful of strangers turn into rivals when they line up for an unusual competition in this comedy-drama from Australia. An auto dealership eager to drum up some publicity stages a contest in which some lucky person will drive away with a brand new SUV. All you have to do to win is be the person who keeps their hand on the car the longest, which turns out to be a greater endurance test than most folks expect -- in one such contest, the winner had to stand with their hand on the vehicle for a bit more than five days. One of the people who lines up for the contest is Tom (Craig Hall), a charming but arrogant salesman who is hooked on contests and will do almost anything to win. One of the other competitors is Jess (Melanie Linskey), a single mother and meter maid who wants a new car for her handicapped son. Tom pegs Jess as a lightweight who doesn't stand a chance against him, but it's the chance to prove him wrong (and the fact she needs the SUV a lot more than Tom) that keeps her in the contest far longer than anyone expects. Writer and director Anthony McCarten adapted Show Of Hands from his own novel. ~ Mark Deming, Rovi

Critic Reviews for Show of Hands

There are no critic reviews yet for Show of Hands. Keep checking Rotten Tomatoes for updates!

There are no featured reviews for Show of Hands at this time.