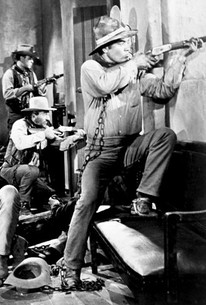 In this western adventure set in a Mexican border town, two prisoners Foster and Pickett (Audie Murphy and Charles Drake), who are chained to a stake, somehow escape with other prisoners. They are led by cruel outlaw Lavalle (Harold J. Stone) who steals $12,000 in securities. Later the two fugitives try to steal the securities from the gang-leader. Unfortunately, they are caught by Lavalle. He holds Foster hostage and sends Pickett to town to cash the securities. The fugitive gives the resulting loot to his ex-girlfriend Estelle (Kathleen Crowley), and returns with nothing. The enraged Lavalle then lets Foster go to get the money. He meets the newly wealthy dance-hall girl who explains that Pickett gave her the money to make up for his losing her life savings gambling. She then grudgingly hands Foster the money. But as he returns to the outlaw lair, he is unaware that Estelle pursues him. Unfortunately, Lavalle sees her, and in the ensuing scuffle Pickett dies trying to protect Foster and the girl. Later the two flee with the angry Lavalle in hot pursuit. In the end, fugitive Foster kills the gang leader. He and Estelle then settle down and lead a peaceful life. ~ Sandra Brennan, Rovi

There are no critic reviews yet for Showdown. Keep checking Rotten Tomatoes for updates!

There are no featured reviews for Showdown at this time.