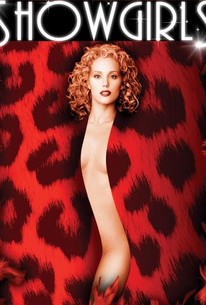 Critics Consensus: Vile, contemptible, garish, and misogynistic -- and that might just be exactly Showgirls' point.

Critics Consensus: Vile, contemptible, garish, and misogynistic -- and that might just be exactly Showgirls' point.

Critic Consensus: Vile, contemptible, garish, and misogynistic -- and that might just be exactly Showgirls' point.

Nomi, an attractive drifter, arrives in Las Vegas with plans to become a dancer. Soon she gets a job stripping at one of the lesser joints on the strip, but eventually catches the eye of talent scouts who hire the performers for a big revue at a casino. She works her way into the cast, and eventually sets her sights on taking the starring role.

Jack McGee
as Jack the Stagehand

Sebastian La Cause
as Sal

Gary Devaney
as Texan at Spago

Michelle Elkin
as Other Audition Dancer

Neisha Folkes-LeMelle
as Other Audition Dancer

Andrea Moen
as Other Audition Dancer

Nancy O'Meara
as Other Audition Dancer

Sandra Plazinic
as Other Audition Dancer

Laurie Sposit
as Other Audition Dancer

Tonya Tovias
as Other Audition Dancer

Michelle Zeitlan
as Other Audition Dancer
View All

Showgirls would be offensive if it hadn't been hyped ("Leave your inhibitions at the door" winked the US publicity). But it has.

Is it sexy? Not when you're laughing.

The thin, terrible people of 'Showgirls' are equally loathsome; you don't have a rooting interest in Nomi or her "dream," and as a result, 'Showgirls' is 131 minutes of watching trashy, vapid people being terrible to each other.

Showgirls... is one of those delirious, hilarious botches that could be taught in film schools as a How Not To.

Berkley's acting début is a joy, if you can call it acting: she jumps up and down a lot to indicate excitement.

One thing I'll say for Showgirls, it's educational. But sadly, it isn't much else.

Perhaps you have been tempted by the hype over this movie's rating to go see what all the fuss is about. Crush that impulse.

The entire picture isn't an exercise in eroticism as much as it's a jumbled series of excuses to have the cast take off their clothes.

This is a camp masterpiece and don't let anyone tell you otherwise.

Showgirls' Camp influences, even shades of deliberate Camp, aren't so much the film itself but in-universe productions compartmentalizing excess into metatext.

Practically nothing works in this tacky sashay through Valley of the Dolls clichés and unerotic burlesque.

To say this movie is smarmy is to understate the case. To say it stinks is more like it.

Never actually saw this one before. Have to admit, kind of liked it. At first the hammy acting (intentional apparently) was a bit off putting, but as the movie went on, grew to like it and see it as the cautionary tale it was. Very over the top look at what girls running away and hoping to cash in on dancing\stripping can expect to face and how there is always someone just like them trying to steal the "fame". It's done in a very exaggerated way which people will either love or hate.

If Verhoeven's intention was to make a satire of Las Vegas as a place of exploitation and hypocrisy then his film is brilliant, but it does feel like he is trying to make something serious, which makes its hilarious campy vibe come off as trashy and completely unintentional.

"So-bad-it's-good" originated with this cult classic and camp satire, and spawned a generation that was okay with having guilty pleasures. Director Paul Verhoeven, the mastermind behind so many great, giant camp films, made a large scale, NC-17, satire on the world of the Las Vegas showgirl, but of course it wasn't meant to be funny. It wasn't meant to have critics reevaluate it years later as possibly one of the greatest films to look at the seedy underbelly of the Las Vegas scene, and the dog eat dog attitudes of those involved in it. Of course, if Verhoeven and screenwriter Joe Ezterhaus were trying to relate to their audience the empirical evilness of "Showgirls" they lost right away with the casting of Elizabeth Berkley. Most famous for the clean cut character Jessie on "Saved by the Bell," Berkley tried to shed that tired old exterior, and in the process also shed her clothes many, many times for this film. The nudity is not what anyone would find repulsive about this film, and may even be a boon for its exploitative content. What becomes annoying pretty fast is Berkley's character, Nomi, who works as a stripper at a club in Vegas, dreaming about dancing in a show. She is temperamental, loud, obnoxious, repellant, and socially awkward in every sense of the word. Berkley's performance is angry at every juncture, and there isn't a moment when you don't wish pain upon her. Critics have reformed their opinions as of late and suggest that this film is about being taken advantage of and though the outlying and supporting characters are despicable, Nomi doesn't seem sympathetic in comparison. Yes, the manager of the club is insidious, the lead is a bitch, the backers are vicious, and the competition is brutal, but Nomi is a self-centered egotist who makes her way to the top with back stabbing and violence. Every word out of her mouth sounds whiney and pathetic, and her performance never gets reared in by Verhoeven, only gone wild time and again. As an exploitation film (suggested by Tarantino) it works perfectly, blending together sex, destruction, and revenge, and for most of the film you can forgive the blatant sensationalism. It was near the end, in one of the most violent and irresponsible scenes ever, that all respect gets lost for the director's vision. It works as the climax for the film, and it's so horrible and hateful that it burns a knot in your gut at the very mention of it onscreen. That's beyond exploitation and it truly dilutes how entertaining this film can be. Nothing gets resolved in the end, and the character doesn't do anything except mouth off for the entire film. It lingers on the edge of accomplishing something, but now remains one of the worst disasters in film history, and hopefully it will remain reviled for the rest of time.

Wow, this film was bad. Showgirls is one of the worst pieces of trash that I have ever seen in my life. This is the mother of all bad movies. This is the most unintentional hilarious that I've seen. Showgirls is supposed a serious drama, but it couldn't be further from that. This is a film that absolutely deserved all the Razzies it has received. I think it's a shame that Paul Verhoeven directed this, and subsequently butchered his career in the process. He would briefly recapture his creative genius with Starship Troops, but that would be short lived. Anyhow, this is Verhoeven's worst film and suffers from everything that makes a bad movie bad. Very poor script, bad cast that can't act and poor directing comprise this piece of trash. This is the type of film to watch when you have a bad movie night. I've seen my fair share of bad movies, but this one is probably in my top twenty worst films ever made. This is laughable from start to finish. The film might have been good if the script would have been thought out more, and rewritten. As it stands, it really isn't much in substance or story to interest viewers looking for a good, engaging plot. The film is over the top, ridiculous and stupid. Don't expect anything with this one aside from a few good laughs at how bad the whole film is. I mean they failed in creating something serious and made it funny, how do you do that? Watch only if you're having a bad movie, then this one is for you. Paul Verhoeven has made the worst film of his career, and it is a misfire of epic proportions.