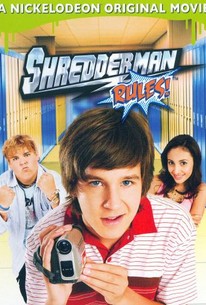 A kid discovers a unique way to stand up for himself and his friends in this family-friendly comedy-drama from director Savage Steve Holland. Nolan Byrd (Devon Werkheiser) is a bright fifth grader who has a knack for creating electronic gizmos and a fondness for remote-control model planes. Nolan is also skinny and shy, which makes him a constant target for thick-headed bully Bubba Bixby (Andrew Caldwell), the son of local sewage magnate Bob Bixby (Daniel Roebuck). Bubba makes life miserable for most of the students at Nolan's school, including Isabel (Francia Almendarez), the girl Nolan worships from afar, but no one is sure what to so about him. An assignment from his teacher Mr. Green (Tim Meadows) gives Nolan the idea to secretly videotape Bubba as he tortures his classmates and post the results online, where parents, teachers and others can see him in action. Needing an alter ego, Nolan creates the online identity "Shredderman," and soon "Shredderman"'s website is the talk of the school as he exposes Bubba's misdeeds to the world. However, "Shredderman" soon has bigger fish to fry when he uncovers evidence that Bob Bixby is planning a scam that will bilk the city for an expensive water processing plant they don't need. Shredderman Rules was based on the popular Shredderman novels for kids by author Wendelin Van Draanen.

This is Werkheiser's movie all the way, and he carries it like a pro.

There are no featured audience reviews yet. Click the link below to see what others say about Shredderman Rules!!