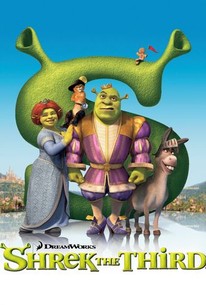 Critics Consensus: Shrek the Third has pop culture potshots galore, but at the expense of the heart, charm, and wit that made the first two Shreks classics.

Critics Consensus: Shrek the Third has pop culture potshots galore, but at the expense of the heart, charm, and wit that made the first two Shreks classics.

Critic Consensus: Shrek the Third has pop culture potshots galore, but at the expense of the heart, charm, and wit that made the first two Shreks classics.

When Shrek married Fiona, the last thing he had in mind was becoming the next King. But when Shrek's father-in-law, King Harold, suddenly croaks, that is exactly what he faces. Unless Shrek (with the help of his trusted companions Donkey and Puss In Boots) can find a suitable King for Far Far Away, the ogre could be stuck with the job. The most promising candidate, Fiona's cousin Artie, an underachieving Medieval high school slacker, proves to be more of a challenge than they bargained for.

Chirstopher Knights
as Blind Mice/Heckler/Evil Tree No. 2/Guard No. 2

Andrew Birch
as Evil Tree No. 1

Kelly Asbury
as Master of Ceremonies/Fiddlesworth

John Krasinski
as Lancelot
View All

Critic Reviews for Shrek the Third

The first two movies had heart, charm, wit, originality, parfait and, most unusually for an animation, characters you could properly care about. This, though, has very little of any of the above, and it breaks my heart.

Apart from some modestly amusing princess shtick and a pleasantly slapsticky opening, there's no real reason for anyone over the age of 11 to see this one.

This is a very skillfully made corporate product, but I wonder who, exactly, will be fully satisfied.

On this evidence, thrice is definitely enough.

There can't be another episode in the pipeline unless it is decided to erase the memory of this one which simply doesn't achieve what the first two films managed: to appeal to kids and parents as well.

It would be a good idea for those involved to quit while they're still (just about) winning.

Technically and visually, the Shrek features continue to advance.

A satisfying sequel that has its charm but isn't quite up to par with its predecessors.

For Shrek The Third, the third time's a charm.

An agreeable time-passer, nothing more.

[An] incredibly boring movie with unpleasant characters and a tired, played out story.

The comic actresses deftly turn the Disney animated standard of helpless and lovely damsels in distress on its head.

Audience Reviews for Shrek the Third

What used to be fresh and witty in the first two films gives place to a stupid slapstick humor full of fart and poop jokes, lacking most of the cleverness of the previous stories. Even so, the visuals never cease to be outstanding and impressive.

It lacks the magic the two films possessed, period. Shrek the Third, although has it's powerful cast (with new additions) stumbles upon its stalling story and uninspiring tale. 3.5/5