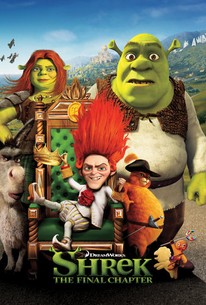 Critics Consensus: While not without its moments, Shrek Forever After too often feels like a rote rehashing of the franchise's earlier entries.

Critics Consensus: While not without its moments, Shrek Forever After too often feels like a rote rehashing of the franchise's earlier entries.

Critic Consensus: While not without its moments, Shrek Forever After too often feels like a rote rehashing of the franchise's earlier entries.

A domesticated Shrek hatches a plan to recapture his mojo and discovers what life in Far Far Away land would have been like had he never existed in this final chapter of the popular animated film series. There used to be a time when the villagers would run in terror at the mere mention of the name Shrek, but these days the big green ogre is married to Princess Fiona and raising triplets. Maintaining your fierce public persona is no simple task when you're juggling infants and changing diapers, so when Shrek realizes that nobody is afraid of him anymore he recruits mischief-maker Rumpelstiltskin to restore his once-mighty roar. Unfortunately for Shrek, that plan hits an unexpected hitch. As a result, the morose monster takes a trip into an alternate-universe Far Far Away land where there is no Shrek, and Rumpelstiltskin reigns. There, Donkey spends his days hauling carts, and a portly Puss in Boots prefers lounging to swashbuckling. Perhaps with a little extra effort, Shrek will be able to regain his status as top ogre in town and still have his happily ever after, too. ~ Jason Buchanan, Rovi

Critic Reviews for Shrek Forever After

[Shrek Forever After] is a satisfactory way to end the series.

The rot set in with the third film, I think, and now, with the fourth, it's decomposed and gone to that black sludge you get at the bottom of the bin.

The movie is a family drama about the family drama, so on every available level it works a treat.

I admit my gentle, feelgood buzz on leaving the cinema was rather premised on the assumption that the Shrek-pipeline is now empty, but it's an enjoyable film nonetheless and a nice way for the series to finish.

Obviously inspired by It's a Wonderful Life, Shrek may not be able to match Frank Capra's delicious pathos, but this is a fitting final chapter for the franchise.

The film is engaging enough, due to a narrative gimmick that makes the old ground new again.

With this fourth entry in the series, it's clear this franchise is becoming more episodic than theatrical.

The film is a delightful, funny, and heartwarming end to the wildly lucrative series.

A terrible sequel that does nothing to gain its value. [Full review in Spanish].

Shrek Forever After is humorous, off-beat and just silly enough for all to have an enjoyable time.

The fun seems gone, and the now-requisite end credits musical number seems like a relic from 2001.

Audience Reviews for Shrek Forever After

Shrek is one of those film franchises where the sequels are the better movies compared to the first, and this to me is the best Shrek film, and one of Dreamworks best films. The animation in this film is top notch, and this is the Shrek film with the best plot out of all the films, Shrek being weary of his non adventurous Ogre life and making a deal with a mischievous person and ending up he got the wrong end of the deal. As for the villain, he is fantastically entertaining to watch and the actor did a great job as this character, and the cool thing is that they got an artist and producer of the Spongebob Squarepants TV series to do the voice of him, and the voice he provides is so fantastically over the top and croaky that it is just laughable, and you love him but hate him at the same time, and when he gets his curmupence it is so satisfying

Shrek stuck in an alternate reality is an interesting premise that provokes some laughs, and even if the plot is not original or memorable at all, this passable animation is an improvement over the mediocre last movie and an amusing conclusion to the franchise.

A decent installment in the series, better than the 3rd just about. I'm not sure they can churn anymore out without it going down hill pretty quickly though. Still prefer the first 2 films.