Shriek If You Know What I Did Last Friday the 13th2000 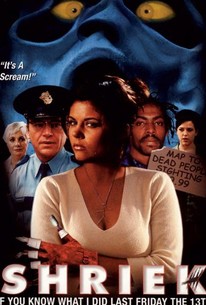 Several of the biggest teen horror hits of the 1990s get slashed in this satiric comedy. Hagitha Utslay (Tiffani Amber Thiessen) is a television reporter with Empty-V News who is covering a series of murders that have the students of Bulimia Falls High School quaking in their boots. The school's principal (Coolio) knows something must be done and decides to hire a top security force to protect the student body; unfortunately, he has to settle for Doughy (Tom Arnold), an inept rent-a-cop who recently lost his job patrolling a shopping mall. Shriek If You Know What I Did Last Friday the 13th also features Shirley Jones, Simon Rex, Majandra Delfino, and Jimmie Walker; the film was directed by John Blanchard, who previously helmed episodes of the television series The Kids in the Hall and SCTV.

Karen Hartman
as Teacher
View All

Imagine the lamest joke you've ever heard and then stretch it out to around an hour and fifteen minutes...

A spoof on a spoof? I think that was crack or something when someone came up with the idea to make this movie.

there is nothing funny about this movie. one of the first of the dreadful series of movie-movies.

A good spoof of recent horror films. If you liked the first Scary movie you should enjoy this. Starring the brunette from Saved by the bell!

This was pretty stupid.