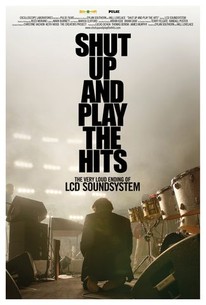 Shut Up and Play the Hits Photos

On April 2nd, 2011, LCD Soundsystem played its final show at Madison Square Garden. LCD frontman James Murphy had made the conscious decision to disband one of the most celebrated and influential bands of its generation at the peak of its popularity, ensuring that the band would go out on top with the biggest and most ambitious concert of its career. The instantly sold out, near four-hour extravaganza did just that, moving the thousands in attendance to tears of joy and grief, with New York Magazine calling the event "a marvel of pure craft" and TIME magazine lamenting "we may never dance again." Shut Up and Play the Hits is simultaneously a document of a once-in-a-lifetime performance and an intimate portrait of Murphy as he navigates both the personal and professional ramifications of his decision. -- (C) Oscilloscope

Critic Reviews for Shut Up and Play the Hits

It's sometimes touching, sometimes really loud, and often both.

Like Martin Scorsese's The Last Waltz, this is a documentary about a farewell concert.

A bittersweet confection - a gorgeously shot concert film that cuts repeatedly between the near-desperate abandon of the show and Murphy, in his apartment the following day, wandering around in his pants and petting the dog.

Surrounded by the most clichéd and craven kind of New York and UK hipsters, journos and schmoozers, Murphy remains adorably low-key, sincere and witty.

Southern and Lovelace skilfully interweave footage of the wondrous, thunderous racket of the gig with Murphy's morning-after reflections on why he bailed out at the height of his success ...

The moody hipster solipsism won't be to everyone's taste, but this is a fitting monument to an influential band.

If the film has a flaw, it's the singer's interview with Klosterman, whose grand theories confuse Murphy's motives rather than clarify them. But you'll get it, because this isn't just a film about LCD.

Part interview, part concert movie, the duo's latest is ultimately a joyous, touching and at times moving tribute to one of the 21st century's most influential bands.

A must for fans of LCD Soundsystem and about fifteen minutes too long for anyone else, this is an entertaining enough exploration of walking away from success and fear of failure.

Will have a much stronger resonance for fans than for those unfamiliar with the band's music. But even newcomers will find the exploration of fame and artistry unusually personal

True to the live experience - taking in tears, joy, sweat and humor - of one of the most influential and acclaimed bands of a generation.

Audience Reviews for Shut Up and Play the Hits

I was always kind of vaguely aware of LCD. I think this is actually one of the best concert videos that I have seen. The sound quality is unbelievable and it turns out that I am into them. One of the few documentaries that makes a nice background soundtrack.

happiest, most beautiful, best documentary of 2012

Shut Up and Play the Hits Quotes