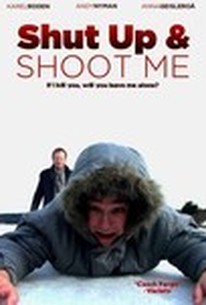 Shut Up and Shoot Me Photos

His wife left flattened by a falling statue as the couple make their way through Eastern Europe on holiday, a grieving British tourist attempts to stage an early reunion with his beloved departed to little avail in director Steen Agro's pitch black comedy. When Colin's (Andy Nyman) wife Maggie (Klára Low) meets an untimely demise under a particularly unstable statue, the pain of his loss is too powerful to bear. After failing to snuff it by taking an electric bath, Colin meets hen-pecked handyman Pavel (Karel Roden) - a pushover whose high-maintenance wife has forced him to accept a series of odd jobs just to keep up with department store payments. Pavel has been assigned the task of driving Colin to the morge so that the visiting Brit can claim his wife's ashes, but Colin quickly offers his wheelman a large sum of money if he will simply end his suffering in the most painless manner possible. Unfortunately death doesn't come as easy for some as it does for others, and as the hapless pair become caught-up in the criminal exploits of hulking hoodlum Karel (Robert Polo) it begins to appear as if the suicidal widower may be death proof. ~ Jason Buchanan, Rovi

Critic Reviews for Shut Up and Shoot Me

There are no critic reviews yet for Shut Up and Shoot Me. Keep checking Rotten Tomatoes for updates!

Audience Reviews for Shut Up and Shoot Me

Hahaha. This was pretty great. I just love those little comedies that make me chuckle throughout...and every so often very much out loud. I expected this to be a Polish film, with all subtitles, but it was mostly all in English. Doesnt matter, but I just found it interesting that it was labeled from Poland. This is definitely an example of one of those great finds that I am always in search of.

Shut Up and Shoot Me Quotes