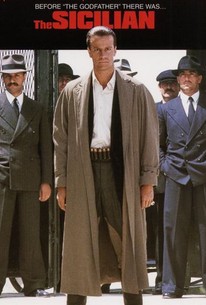 Adapted from Mario Puzo's novel, The Sicilian is an attempt to chronicle the life and times of Mafia leader, patriot and real-life Robin Hood Salvatore Giuliano, the infamous bandit who, together with his rag-tag band of guerillas, attempted to liberate 1940s Sicily from Italian rule and make it an American state. Giuliano (Christopher Lambert) robs from the rich conservative landowners to give to the poor, serf-like peasants, who in turn hail him as their savior. As his popularity grows, so does his ego, and he eventually thinks he is above the power of his backer, Mafia Don Masino Croce (Joss Ackland). The Don, in turn, sets out to kill the upstart by convincing his cousin and closest advisor Gaspare (John Turturro) to assassinate him. Nearly thirty minutes of screen time were haphazardly hacked off director Michael Cimino's original cut by the studio.

Richard Venture
as Cardinal of Palermo

Trevor Ray
as Frisella, the Barber

Leonardo Treviglio
as Policeman in Wheatfields

Franco Trevisi
as Policeman in Wheatfields

Danilo Mattei
as Lieutnant
View All

Critic Reviews for The Sicilian

The Sicilian represents a botched telling of the life of postwar outlaw leader Salvatore Giuliano.

The dialogue is ponderously poetic, stilted and over-emphatic, characters are convenient cyphers, and both cutting and photography tend towards the bombastic. Folly, then, but gloriously inept and overblown.

The film is a mess, though hardly on the panoramic scale of Heaven's Gate.

If Cimino had gone along with the campy nosedive this movie takes, Sicilian could have been to mob films what Blazing Saddles was to westerns.

The Sicilian is unambiguously atrocious, but in that very special, howlingly grandiose manner that only a filmmaker with visions of epic greatness working on a large scale with a multinational cast can achieve.

One of this film's big problems is that you can hardly see it. The foregrounds are dark and indistinct. The backgrounds are overlit and washed-out.

Not since Midnight Express had a film premiered where a certain Anglo-Saxon arrogance was so evident. [Full Review in Spanish]

A wallow in bloodshed, cliches and grandiose effects coming from no discernible causes.

Breathtakingly beautiful, but a mess.

The actors aren't bad; they are simply miscast.

This, not Heaven's Gate, is Cimino's true self-indulgent boondoggle.

Audience Reviews for The Sicilian

This could be a good mafia movie, but the actors and actuatios are so poor (except John Turturro) that makes this movie a crap.

Does have its moments, but has the feel of being cut from a much longer film.