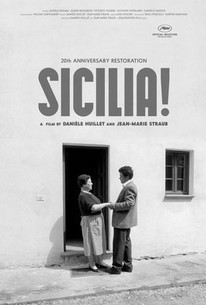 Elio Vittorini's novel Conversation in Sicily was adapted for the screen in this collaboration between directors Jean-Marie Straub and Daniele Huillet. Set in the 1930s, Sicilia!/Sicily! follows Silvestro (Gianni Buscarino), who has returned to Sicily after fifteen years in the United States. He quickly discovers that poverty grips the island; many common foodstuffs are now expensive and hard to find, while a growing number of Sicilians are moving to the relatively prosperous Italy. While taking a train to Catania, Silvestro meets a former Sicilian who now lives in Northern Bologna, where he works as a policeman, though he prefers to deny it -- it's the stereotypical job for Sicilians who have moved north, and he hopes to some day find a better position that will help him elevate the status of his people. Eventually, Silvestro arrives at the home of this mother, now single after leaving her adulterous husband, and they argue about their lives; Silvestro is obviously still upset about the divorce, while mother stubbornly defends her actions. Sicilia!/Sicily! follows a stage adaptation of Vittorini's novel presented in Italy; most of the cast of this film also appeared in the play.

The actors, all nonprofessionals, declaim their extended discussions with grand, high-relief diction, and the film's starkly exquisite black-and-white images set the dialogue as if to visual music.

Whenever this theatrical pause occurs, you ask: To what end? Perhaps a question mark in the geographically inspired title, rather than an exclamation point, is in order.

It's a brief 66 minutes, but packed with talk and meaning.