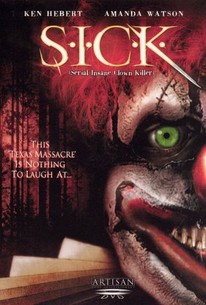 Four well-heeled Texans discover themselves battling a killer whose alter ego is no laughing matter in this thriller. Brandon Walker (Ken Hebert) is a twentysomething businessman who wants to get away from it all for a few days, and invites his girlfriend Tracy (Amanda Watson) and a couple they know, Mark (Hank Fields) and Susan (Chris Bruck), to join him for a long weekend at his family's cabin in the woods. En route, Brandon picks up a hitchhiker, Denise (Melissa Bale), who wants to get out of town after a quarrel with her boyfriend. That night, the five relax around a campfire, enjoying a few drinks and some marijuana as they swap scary stories. Denise tops them all with the legend of a murderous and psychotic clown who is said to haunt the nearby hill country. The four friends begin to suspect, however, that Denise's story is no myth when she disappears and a number of sinister talismans begin to appear. The title S.I.C.K. stands for "Serial Insane Clown Killer." The film was originally screened under its production title, Grim Weekend.

There are no critic reviews yet for S.I.C.K.. Keep checking Rotten Tomatoes for updates!

A major dissapointment...not alot horror in this one as I thought there would be. There's barely even a "Serial Insane Clown Killer" in it. Very few blood\scares..this movie didn't really satisfy me as i thought it would.