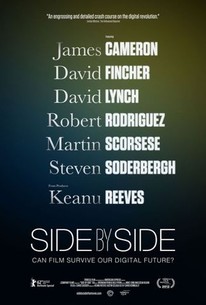 Critics Consensus: Keanu Reeves proves a groovy guide through this informative exploration of how technology is transforming cinema, with an even-handed defense for both the old and the new.

Critics Consensus: Keanu Reeves proves a groovy guide through this informative exploration of how technology is transforming cinema, with an even-handed defense for both the old and the new.

Critic Consensus: Keanu Reeves proves a groovy guide through this informative exploration of how technology is transforming cinema, with an even-handed defense for both the old and the new.

Side by Side Photos

Join Keanu Reeves on a tour of the past and the future of filmmaking in Side by Side. Since the invention of cinema, the standard format for recording moving images has been film. Over the past two decades, a new form of digital filmmaking has emerged, creating a groundbreaking evolution in the medium. Reeves explores the development of cinema and the impact of digital filmmaking via in-depth interviews with Hollywood masters, such as James Cameron, David Fincher, David Lynch, Martin Scorsese, Steven Soderbergh, and many more. -- (C) Tribeca

Critic Reviews for Side by Side

The documentary would have been that much better with a more explicit focus on why the average filmgoer should care.

This is route-one stuff.No serious film enthusiast will, however, want to miss Side by Side.

Maybe this geekily precise, Keanu Reeves-fronted documentary fretting over the death of celluloid needs to give digital its due.

Keanu Reeves is a game frontman of this fact-filled, slightly chaotic doc about the rise of digital technology in film.

It's sweet and sparkling, as glassfuls of thought are provided by James Cameron, Martin Scorsese, George Lucas, David Lynch, Steven Soderbergh and other champagne cinematic cerebra.

It's this simple: If you like movies, you need to see "Side by Side."

The film's breadth of opinions - of which there are too many to recount in a single article - indicates that there is no 'right' choice, and impressively captures a debate that may not rage forever.

... if you're a film nerd, you are IN ABSOLUTE HEAVEN while watching this, totally enamored of every word, and thrilled about hearing the debate.

Celluloid or digital film - which is the better format? Directors, cinematographers, editors and other film professionals weigh in on the question in Chris Kenneally's densely packed doc.

...could have used more movie-specific discussions of the aesthetic implications of celluloid versus digital.

Side By Side is a riveting, under-the-hood distillation of 100 years of Hollywood experimentation, innovation and expensive bravery.

Audience Reviews for Side by Side

Side by Side explores the question of film's worth in an increasingly digital future. It all boils down to the simple fact that even if the format changes, the medium is only as good as the artist's ability to manipulate it to tell a story. Some filmmakers swear by film. Others by digital. But ultimately, it's the quality of the work that matters. A great documentary.

Insightful all the way through, "Side By Side" is a great documentary, filled with tons of well-known celebrities as they talk about their thoughts on the conversion from digital filmmaking and the future of the industry. There are times, although they are different opinions, that the same thing is repeated, because there is only so much you can have an opinion on about this. Let's face it, old-fashioned filmmaking, and things of the like, will inevitably die out within the next decade, and probably sooner. Most directors believe this to be the end of cinema, but I believe we are in a rut that will take a while to get out of, because we are having trouble finding the absolute best talent out there, or just settling for middle of the road. This was very interesting to watch, due to the classic directors speaking their minds on the matter, but truthfully, once they are gone, film will be dumber and dumber. So yes I am scared for the industry, because film has such a huge impact on society, but the world goes how it goes, and sometimes it is not controllable. To me, that is what this film's message really was. I really loved watching "Side By Side," and I highly recommend fans of any genre of film to watch this.

Keanu Reeves brings together a boatload of Hollywood's finest to discuss the physical and ideological issues facing cinema. It may try to force too much information into too little time if you don't know about the history and technology of film, but this documentary romanticizes the art with such passion and finesse that it stands as a reaffirmation of the power of movies and the importance of understanding their history and possible future.

An insightful, thought-provoking and unbiased documentary on the debate between digital vs. film.

Side by Side Quotes