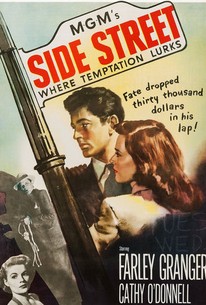 Farley Granger plays a casually larcenous New York City mailman who steals a shipment of money. Granger's excitement over this windfall turns to terror when he discovers that the money was part of a transaction between gangsters. Harassed by both crooks and cops, Granger lives to regret his impulsive theft--especially when it is tied in with a murder. The story is wrapped up in spectacular fashion with a climactic car chase. Farley Granger's costar in Side Street is Cathy O'Donnell; both were on loan to MGM from Samuel Goldwyn, and both were banking on their previous successful teaming in RKO's They Live By Night.

James O'Neill
as Priest
View All

Critic Reviews for Side Street

Cut down to its essentials, that's just about all it is: in short. It can only be fully recommended to those who have a deep and morbid interest in crime.

The film's title is a reference to its entwined physical and moral frameworks.

Probably a minor Mann, but still very much worth seeing.

...bristles with sharp angles, playful juxtapositions of light and shadow, and every facet of film noir you would expect to find in the very best of the breed.

Audience Reviews for Side Street

One of Anthony Mann's last and great film noir pieces that seems to borrow quite a bit from Naked City. Mann's direction overshadows the just there performances by Farley Granger, Cathy O'Donnell and the rest of the cast. Mann sets up some spectacular shots of late 40s New York City. The uneven and bouncy script start to take away from Side Street until that final brilliant car chase (which ultimately won me over) goes down. Great opening titles too.