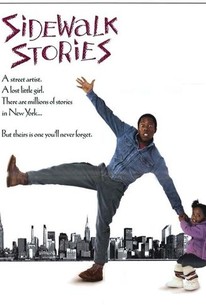 A young artist living in New York, tries to make a living sketching passers-by on the street. He survives on his meager means and has found refuge in an abandoned building. One night, on the corner of a back alley, he finds a little girl whose father has just been murdered. While struggling to take care of her, he meets a young rich woman who immediately falls in love with this awkward couple. Twenty years before The Artist, Sidewalk Stories portrays the friendship of a tramp and a child, in a moving and funny homage to Chaplin's The Kid. Both witty and tender, Charles Lane's gorgeous black and white comedy pays tribute to the silent film era, as well as capturing the life of homeless New Yorkers.

Jody O'Neil
as Customer No. 1

The interplay between Lane and his real-life daughter Nicole Alysia-who plays the foundling-is touchingly tender.

Laughs, romance, and even something of an adventure flower in Lane's New York.

Charles Lane's follies are enmeshed within bigger pictures of reality, reestablishing the film's thesis of comedy as a mode of survival.

Lane is endlessly inventive in the ways he finds to create humorous situations and tell his story through images, and the soundtrack music, by Marc Marder, reinforces everything that happens.

Lane's heartfelt and endearing film plays like a time capsule love letter to the eternal city.

It's funny, it's touching, it's very clever and it has a quite remarkable lightness of touch.

This lively forgotten film, which says so much without speaking, is certainly worthy of DVD salvation. Criterion, are you listening?

While there is rioting happening over a taxi on Wall Street, things are much more peaceful a couple miles north as a homeless street artist(Charles Lane, who also wrote and directed) plies his trade while waiting for the IFC Center to open. As he observes the world going by, he also witnesses a brutal murder in an alley. During which, he shields an infant girl(Nicole Alysia) from danger. First off, I applaud Charles Lane trying to do something different by doing something retro where he gives the homeless characters the only spoken words of "Sidewalk Stories." And I am always a sucker for views of a bygone New York City, in this case, from a movie made in 1989. However, there is also the sad irony of a film steeped in realism having a story, especially involving one incident, that does not really ring true at the same time.