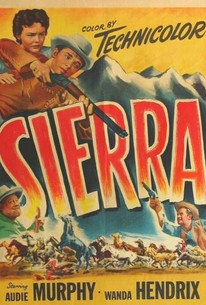 In this western, a remake of Forbidden Valley (1938), a man falsely accused of murder takes his son and rides off into a secret hideout deep in the wilderness. Later the man's lady lawyer accidentally discovers the lair. It is she who tells him that the real killer confessed before he died.

I. Stanford Jolley
as Snake Willens

Jack Ingram
as Al
View All

There are no featured audience reviews yet. Click the link below to see what others say about Sierra!