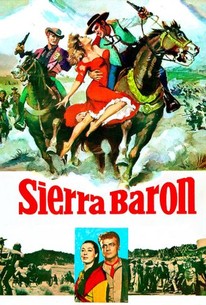 In this western set in the California territory in the mid-19th century, a rancher tries to protect his Spanish land grant from greedy American landgrabbers. Unfortunately the eastern interlopers bring in a Texas gunfighter to frighten the man. The gunfighter ends up falling in love with the rancher's sister, and decides to spare them. In the end, the gunman is killed during the climactic shoot out. The girl who loved him is devastated. ~ Sandra Brennan, Rovi

There are no critic reviews yet for Sierra Baron. Keep checking Rotten Tomatoes for updates!

There are no featured reviews for Sierra Baron at this time.