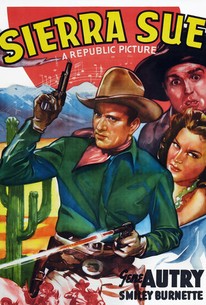 The valley in this Gene Autry western is threatened by a weed capable of poisoning the cattle. Burning the range proves ineffectual, however, and in desperation the local banker, Stacy Bromfield (Frank M. Thomas), sends for a government inspector. The latter proves to be none other than our old friend Gene, who quickly suggests spraying the area with a chemical. But the head of the cattlemen's organization, old George Larrabee (Robert Homans), foolishly ignores the advice and almost suffers unimaginable consequences when his henchman Frenchy (Hugh Prosser) shoots down a crop dusting Jerry Willis (Eddie Dean). Autry, Burnette and leading lady Fay McKenzie take time out from battling range weed to warble "Be Honest with Me", "I'll Be True While You're Gone", "Ridin' the Range", "Heebie Jeebie Blues" and the title tune. Sierra Sue was restored in 2001 by Gene Autry Entertainment.

Horace B. Carpenter
as Spectator

There are no critic reviews yet for Sierra Sue. Keep checking Rotten Tomatoes for updates!

There are no featured reviews for Sierra Sue at this time.