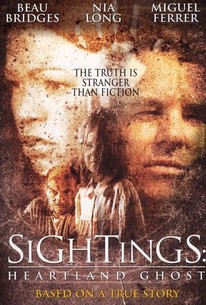 Based upon an allegedly factual story featured in the paranormal reality series Sightings, this made-for-cable chiller stars Beau Bridges as Derek, a cynical TV producer. Despite his own personal skepticism concerning supernatural activity, Derek agrees to visit a supposedly haunted house in Kansas for the purposes of a television documentary. With his field director Lou (Nia Long) and prominent psychic Allen (Miguel Ferrer) in tow, Derek launches his investigation of the "bad" house. Not unexpectedly, the trio soon learns that the haunting is genuine -- and in so doing, they solve a mystery that has baffled local authorities for 100 years. Heartland Ghost made its Showtime Network debut on October 27, 2002.

Andy Maton
as Roger
View All

There are no critic reviews yet for Sightings: Heartland Ghost. Keep checking Rotten Tomatoes for updates!

There are no featured audience reviews yet. Click the link below to see what others say about Sightings: Heartland Ghost!