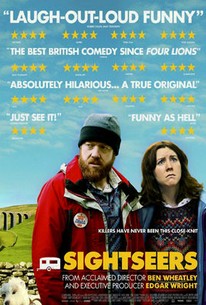 Chris (Steve Oram) wants to show Tina (Alice Lowe) his world and he wants to do it his way - on a journey through the British Isles in his beloved Abbey Oxford Caravan. Tina's led a sheltered life and there are things that Chris needs her to see - the Crich Tramway Museum, the Ribblehead Viaduct, the Keswick Pencil Museum and the rolling countryside that separates these wonders in his life. But it doesn't take long for the dream to fade. Litterbugs, noisy teenagers and pre-booked caravan sites, not to mention Tina's meddling mother, soon conspire to shatter Chris's dreams and send him, and anyone who rubs him the wrong way, over a very jagged edge. (c) IFC Film

Critics Consensus: The Great Gatsby is a Case of Style Over Substance

Not only is Sightseers a relishable achievement for its devisers, Lowe and Oram, but it enhances Wheatley's reputation as currently the most refreshingly offbeat and unpredictable director of British crime movies.

A must for cult connoisseurs who take their comedy strong and dark.

Devised by acting-writing comedy team Lowe and Oram and co-scripted by Amy Jump, director Ben Wheatley's professional and personal partner, the movie pokes fun at the social limitations of these lumpen Midlanders without sneering at or patronizing them.

It's not a perfect blend, but Ben Wheatley's film is different enough - on second thought, let's just call it what it is: weird - to warrant your attention. Your admiration, even.

A British black comedy made in the spirit of "let's run with this demented premise till the tank is empty."

It's just not quite funny enough.

This dark comedy would be a devastatingly terrifying movie if it were not for the frequent moments of hilarity. As it stands, Sightseers is a pretty special and wholly effective mix of the two.

This is a unique movie, and one worth seeing if you're the kind of person who likes sour candy. Don't go to the beach house or your friend's mom's cabin up in Big Bear. Stay at home and enjoy being alone.

The film is a violent, hallucinatory Bonnie and Clyde story, tracing two youngish lovers on a gory rampage across the countryside. This film just proves once again that Wheatley has zero regard for convention.

Initially sweet and good natured, only to become disturbing yet laugh-out-loud funny, Sightseers is a dark treat.

Fantastic black comedy, burnt like toast. Unfilled expectations and the need to be loved turn into a hilariously horrific caravan trip for two strange lovebirds.

There are few directors out there who can achieve the appropriate balance between horrific violence and laugh-out-loud comedy, but Wheatley's masterful touch makes this a consistently enjoyable.

A detestable film that forces us to follow for eighty-eight minutes a couple of hateful psychopaths with a sick story that wants to be a very dark comedy and make fun of their gruesome atrocities - but everything is just too much bad taste to be remotely funny.

Evil has a knitted jumper. Good Dark Comedy British Film! To be honest, Sightseers isn't right for many people at all; it's what you might call a niche film. It's going to satisfy a minority audience, but those few who do relish the thought of another dark, very dark, British comedy are going to absolutely delight in it. Sightseers is woefully original, full of witty dialogue, charming characters and some of the best British Black humor I have seen in a long time if not ever. Sightseers invades the brain, it expulses laughter from the belly and at times it wriggles under the skin like white noise and scratches at the nerves. Sightseers, overall, plays out like a cross between Bonnie & Clyde and In Bruges, leading to a perfect pitch-black comedy that's not for the faint hearted. Chris wants to show girlfriend Tina his world, but events soon conspire against the couple and their dream caravan holiday takes a very wrong turn.

A dowdy and desperate dog psychologist goes on a holiday in the English countryside with her new boyfriend, and soon notices that people who annoy him turn up dead. It has the tone of a black comedy, but the laughs are extremely subtle; it ends up like a British working class version of BADLANDS, with more relationship talk.