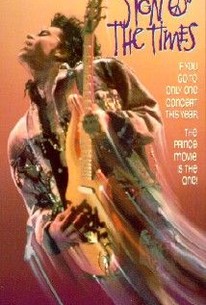 This 1987 concert film, shot by Purple Rain director Albert Magnoli, was released to coincide with the release of Prince's album of the same name. Featuring clips of live stage performances from Rotterdam and Minnesota, Prince: Sign O' the Times is also interspersed with short films from the artist. Fan favorites, such as "Little Red Corvette" and "U Got the Look," are performed as Prince is accompanied on stage by Sheena Easton and drummer Sheila E.

[The film] was directed by Prince, and he does a good, sound job without finding an answer to the problem of all directors of rock concert films: After you have exhausted the basic repertory of obvious shots and audience reactions, what do you do then?

The utopian rocker, whose manner and music promise a blissful, dreamy union of the races and the sexes, doesn`t need a story line to communicate his meanings, which remain by pop standards unusually complex and considered.

Prince provides musicvideo addicts with a pure fix of visual and aural synchronicity.

Musically, it's a matter of opinion, but from the sparse funk of the title tune to the bebop blow-out around Charlie Parker's Now's the Time, this guiltless grooving in Eden fizzes with brilliantly choreographed wit and invention.

Prince, whose ties to soul and jazz are clearer than ever before, whose willingness to embrace different musical forms seems to grow all the time, has never cast a stronger spell.

As a concert film, judged from the music, Sign O' the Times is near the top. As a movie -- carrying inside it the embryo of other movies -- it's not fully satisfying.

Prince should not be allowed behind the camera.

Sign 'O' The Times is Prince at his commercial and critical peak, a life-affirming playground of music and sex. It is also Prince at his friendliest.

One for devoted fans only.

Unfortunately, it only hints at the real fire the purple one brings to his shows.

What the [film] confirms is that more often than not, Prince is one of rock's most charismatic and compelling performers.

There are no featured audience reviews yet. Click the link below to see what others say about Sign o' the Times!