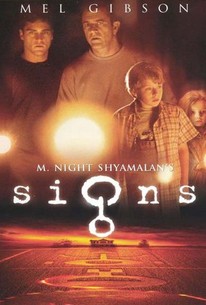 Critics Consensus: With Signs, Shyamalan proves once again an expert at building suspense and giving audiences the chills.

Critics Consensus: With Signs, Shyamalan proves once again an expert at building suspense and giving audiences the chills.

Critic Consensus: With Signs, Shyamalan proves once again an expert at building suspense and giving audiences the chills.

Following the smash hit The Sixth Sense (1999) and the under-performing follow-up Unbreakable (2000), directing phenom M. Night Shyamalan returns to the summer box office landscape that served as the backdrop for his cinematic breakthrough. In Signs, another paranormal outing for the writer-director, Shyamalan explores the eerie implications of a 500-foot crop circle that mysteriously appears on the Bucks County, PA farm of reverend Graham Hess (Mel Gibson). As Hess and his family (Joaquin Phoenix, Rory Culkin, Abigail Breslin) try to take stock of what the sign means, and how its message incorporates into their faith, they start to get the feeling they are not alone in the fields behind their house. Shyamalan re-teams with producers Frank Marshall, Sam Mercer and Kathleen Kennedy, and produces the project in association with his Blinding Edge Pictures banner and Touchstone Pictures.

Signs is a tense experience; even the opening credits lunge at your throat with orchestral shrieks. It may one day reveal itself as a minor classic, a new Invasion of the Body Snatchers for the manufactured scare of its day.

It's the content that's to blame. Signs works on a confused storyboard. What's Shyamalan trying to say anyways? Nothing, or rather a bit too much.

Signs was the film that sparked the desire that led to the purchase of a camera, many short films, and a love of movies that hasn't left me to this day.

Excellent, but has some extreme tension and peril.

Shyamalan is technically a superb film-maker, for all that he's picked up most of his tricks from Spielberg and Hitchcock.

Be it supernatural, alien, or our own personal demons, Shamlyan gets it. Signs is subtle and yet terrifying.

I'm a sucker for an effective scary movie that involves aliens and if you're gonna tell me that you didn't jump during that scene in the basement with the alien arm, I'm gonna call you a liar.

A filmmaker who here has refined his forms to distill the very essence of his way of understanding cinema. [Full Review in Spanish]

An emotional, yet old-fashioned scary movie punctuated with terror and psychological suspense, Signs will have you holding your breath, biting your nails and sitting on the edge of your seat - even long after the film has ended.

Enthralled by his own genius and desire to make another blockbuster, Shyamalan has taken a terrific B-movie idea and inflated it into what he wants us to believe is a serious commentary on faith.

Signs manages to be creepy, emotional, and thrilling all at once.

While never losing track of what he wants to say, Shyamalan knows how to build suspense with scenes that can be terrifying, although the film's flaws start to become more and more apparent the moment we stop to think about the details (like the reasons behind the villains' motivations).

While I perhaps did not understand all the apparent symbolism, I can certainly appreciate great suspense when I see it and this movie scared me. It is so toned down and slow, giving you only hints here and there, teasing you on the other end, that you just end up gripped with this film. Again, the philosophical part of the movie was completely lost on me (something about lost faith perhaps) but don't let that bog you down from watching this.

An expertly put-together sci-fi thriller which is the last great M. Night Shyamalan movie put out in over a decade. Mel Gibson and Joaquin Pheonix are excellent as two brothers trying to run a family together, but once their crops come under attack and an alien invasion seems imminent, personal history erupts as a war of possibly apocalyptic heights comes to Earth. This is right on par with "The Sixth Sense" in terms of Shyamalan's work, and the ending is one of my favorites of all-time as he masterfully interweaves a powerful soundtrack with a ferociously action-packed conclusion. A massively under-appreciated and misunderstood movie that will hopefully be more respected as the years go on. Gibson gives one of the best performances of his career, as does Phoenix, and the strong acting and astoundingly good story-telling makes this a flawless motion picture.

What can I say? This and "The Sixth Sense" seem to be M. Night (I'm gonna murder this guy's last name) Shamlayn's only good movies. This movie isn't your average alien invasion movie. It's a story with symbolism encrypted in the plot. Mel Gibson plays a former preacher who has lost on faith in God ever since his wife was killed a tragic accident. He has to raise his two children with the help of his brother played by Jaqouin Phoenix. The acting in this movie is solid. Say what you want about Mel Gibson, but the guy knows how to act. Phoenix is very good in his role and the child actors were also really convincing. M. Night Shamdada even makes a cameo as the guy who accidentally killed Mel Gibson's wife. (That dick.) There is one scene in this movie that scared me to the point experiencing many sleepless nights. (I was like 7, don't judge.) If you haven't seen the movie, I won't explain a lot about that scene, but let's put it this way: Those poor Brazilian kids will never have a birthday party the same way again. Some parts of this movie seemed incredibly drawn out and forced and some scenes near the end felt really slow and the writers didn't know what they wanted to do. But that should be expected in an M. Night Shamaladamn movie. This movie also requires a sharp mind. Some parts of the movie that are minor and seem pointless eventually play out to be important to the plot, so be on the lookout for those. All in all, this was a very entertaining and enjoyable film. The story was subtle, but in a very good way. It was directed in a way that only M. Night Shamackadonaroopashire could pull off, despite him making a lot of really crappy movies lately.