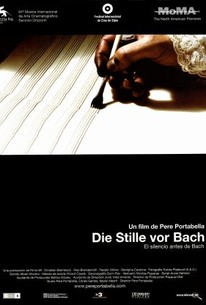 Looks at the profound relationship between image and music where the latter is not merely conceived as subsidiary to the image but as a subject of the narration in its own right. It springs from a previously defined musical structure, and the soundtrack feeds on works by J.S. Bach and two of Felix Mendelssohn's sonatas; a promenade through the 18th, 19th, 20th and 21st centuries led by the hand of J.S. Bach.

The Silence Before Bach is a movie in which to take refuge, and it abjures the summer heat of pop culture for a cool and lasting immersion in the miracles that people are and can create.

The engaging enigma of The Silence Before Bach demonstrates an artistic wisdom that is as satisfying as it is challenging.

The demolition of the music bio-pic as witnessed by Todd Haynes' I'm Not There and the parody Walk Hard continues robustly with this time-tripping melange from Spanish director Pere Portabella.

Provide[s] gorgeous lensing and art direction and some of the world's most beautiful music.

Like the music it celebrates, this is a film made in glory of the world.

Arguably stronger conceptually than visually, surreal mix of the unexpected and the banal is definitely not to everybody's taste. But the music is inarguably sublime.

"Bach is the only thing that reminds us that the world is not a failure." A character from [The Silence Before Bach] says it ... and we intuit their quintessences after. [Full review in Spanish]

Portabella never loses his sense of humor even amidst the grandeur of the music, and the seriousness of the ideas.

A dog watches its blind master tune a piano. It's only 10 minutes into The Silence Before Bach and already I am bored as that dog.

Think of it strictly as a wonderful music video. Hey, Pink Floyd has a movie, so why not Bach?

Driven solely by the filmmaker's prosaic associations. Portabella does not discover the composer through his music.

About as far away from a conventional composer biopic as Kraft's products are from real cheese.

[font=Century Gothic]"The Silence Before Bach" is a partially successful attempt at showing the journey that the music of Johann Sebastian Bach(1685-1750) has made from the 18th century to the present day, as displayed in a series of vignettes starting and ending with a player piano. In fact, there are a wide variety of musical instruments used in this film including a harpsichord(which I've always liked the sound of), a kickass organ, a wind instrument, a harmonica and cellos played on a subway train. [/font] [font=Century Gothic]The journey started with Bach working as a cantor in a church in Leipzig, so it may not be a surprise that the one continuing thread throughout is the importance of religion in his work, even in this thankfully more secular age. For example, one character drives a truck cab decorated with Virgin Mary's on the side. While seamless transitions happen throughout, a graceful segue from one definition of passion to another is particularly of interest. But the one element missing is the creative spark. And if you say that it is divine, I will scream.[/font]