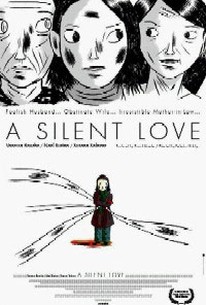 A pair of e-mailing lovers discover romance is more difficult in the real world than in cyberspace, especially when a highly unexpected rivalry comes into the picture in this understated comedy drama. Norman (Noël Burton) is a middle-aged college professor from Montreal who, through an on-line dating service, has been corresponding with Gladys (Vanessa Bauche), an attractive younger woman from Mexico. Emboldened by the dating service's prediction that their relationship has a 61 percent chance of lasting, Norman flies to Mexico to ask for Gladys' hand in marriage. Gladys accepts, but only under the condition that her mother, Fernanda (Susana Salazar), can join them in Canada. Norman agrees, but it isn't long before both Norman and Gladys discover the chemistry they enjoyed through the mail doesn't work nearly as well in person. Gladys wonders aloud if Norman actually wrote his own letters, and Norman starts to suspect his new bride is more interested in a green card than in him. Matters become all the more difficult when Norman finds himself becoming infatuated with Fernanda, who is not much older than he is and quite attractive for her age. A Silent Love was the first feature film from director Federico Hidalgo, who co-wrote the screenplay with Paulina Robles, his spouse.

Critic Reviews for A Silent Love

Puts an unusual spin on some of the clichés of the romantic comedy.

Its charms sneak up on you because of the nuanced performances of Burton, Bauche and particularly Salazar as their characters discover that what people think they want and what ultimately makes them happy aren't necessarily the same thing.

They're vibrant individuals with minds of their own, which is another way of saying that they only occasionally obey the dictates of Hollywood romantic-comedy convention.

This story of a shy Canadian professor who weds a younger Mexican woman he has met online is not content to be a feel-good intercultural idyll.

A Silent Love manages to entertain while saying something about loneliness and culture shock.

An unimposing film of many a film festival, Federico Hidalgo’s “A Silent Love” is a decent film full of true human emotions

Robles and Hidalgo ring enough changes on a stock situation that you're never sure where it's going, and that alone is no mean achievement in a genre as formulaic and enervated as romantic comedy.

Performed with subtlety and offering no pat resolutions

A poor script, occasionally baffling editing, and actors who cannot rise above the various missteps combine to make A Silent Love a messy, confusing debut that more resembles a student film than a theatrical release.

Salazar ... pulls the audience over to her corner early on and never lets go of them.

Hidalgo takes us on an interesting journey into the hearts and minds of people who uproot themselves and spin slightly out of control in a new milieu.

Audience Reviews for A Silent Love

There are no featured audience reviews yet. Click the link below to see what others say about A Silent Love!