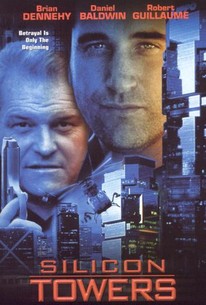 Jonathan Quint stars in this tale of corporate crime and espionage directed by Serge Rodnunsky. Charlie Cook (Quint) suddenly finds himself promoted to an executive level position at Silicon Towers, only to receive a frightening anonymously-sent E-mail a short time later. The letter reveals a highly unlawful scam Silicon Towers has been conducting that involves hacking into banks around the world thanks to a top-secret computer chip the company created and planted into the equipment it sells. When the powers that be at Silicon Towers learn of Charlie's inside knowledge, the corporate security force is unleashed to track him down. Charlie is thus forced to run for his life, while attempting to unveil the scam to the authorities. Brian Dennehy, Daniel Baldwin, and Robert Guillaume, while not starring in the film, are featured in minor roles.

There are no critic reviews yet for Silicon Towers. Keep checking Rotten Tomatoes for updates!

There are no featured reviews for Silicon Towers at this time.