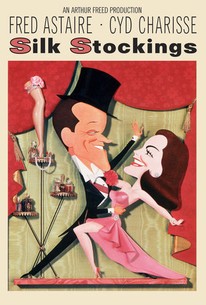 Silk Stockings, a musical version of the 1939 Greta Garbo film Ninotchka, was adapted for the stage by George S. Kaufman, Leueen McGrath (the then-Mrs. Kaufman) and Abe Burrows, with music and lyrics by Cole Porter. The Broadway production, starring Hildegarde Neff and Don Ameche, ran 478 performances. The 1957 film version cast Fred Astaire as a movie producer and Cyd Charisse as dedicated communist functionary Ninotchka. In the original 1939 film, Ninotchka was sent from Mother Russia to Paris to check up on three commissars, who in turn had been ordered to retrieve a fortune in Czarist jewels. This time the commissar trio, played by Peter Lorre, Jules Munshin and Joseph Buloff, have been dispatched to Paris to reclaim defecting Soviet composer Wim Sonneveld. Since Astaire wants the composer to write the songs for his newest musical, he plies the commissars with wine, women and song, dissuading them from their mission. When Ninotchka shows up to retrieve the errant Russians, Astaire turns on the old charm with her as well. She gradually succumbs to the combined lures of romance and capitalism, but returns to Russia when she believes that Astaire has thrown her over for film-star Janis Paige (delivering a hilarious take-off of swimming star Esther Williams). But Astaire convinces her that he truly loves her, and all is well. Most of the Cold-War comedy in the Broadway production of Silk Stockings remains intact in the movie version (Soviet official George Tobias, seeking information on his predecessor, looks up the man's record in "Who's Still Who"). Also surviving virtually untouched is the Cole Porter score, including "All Of You," "A Chemical Reaction," "Without Love," "Satin and Silk," "The Red Blues," "Stereophonic Sound," and the rollicking "Siberia" (which offers the spectacle of a singing, dancing Peter Lorre!) Watch for Fred Astaire's future TV-special partner Barrie Chase as one of the dancers.

Tybee Afra
as Dancer
View All

The picture effectively marked Fred Astaire's retirement from dancing -- it was his last significant on-screen hoofing, and he's as sublime as ever. Yet it's co-star Cyd Charisse who dominates the picture.

Has a few sparkling moments that are irresistible.

Mamoulian's swan song is one of his -- and Astaire's -- best.

This is a musical version of Ninotchka, and with a better cast, I enjoyed it. It's a lot funnier than the first movie too.